By Mark Foley and Doug Graham

iRiver http://www.iriveramerica.com/ is a company that makes solid state MP3 players, similar to the Apple iPod. The reason that videographers are interested in these players is that the iFP 7xx and 8xx models will accept an external microphone connected to their Line In jack. (NOTE: The newer T10 and T30 series players can record using their built-in mic, but cannot use an external mic. The audio quality of the internal mic is unsatisfactory for our purposes).

Used in this way, the iRiver becomes an alternative to a minidisc recorder or a wireless microphone for capturing audio. This article is a compilation of information and advice from iRiver users on the Video University Wedding and Events discussion forum. Much of the original data was collected by Mark Foley; thanks also to “Smitty” and other Video University members.

General Setup. This only needs to be done once, unless you use your iRiver as an MP3 player when it’s not working as a recorder.

Line In Auto Sync: OFF

Startup. These are the steps to turn the iRiver on and start recording.

Press and HOLD the STOP button

Press and hold the record button. From the menu that comes up, select Line In.

Data transfer. iRiver uses a non-standard USB cable. When connecting it to your computer, use the cable provided with the device, rather than a generic USB cable.

The iRiver’s performance depends a lot on what microphone you use with it. Here are links to some popular mics:

The iRiver has some idiosyncrasies when it comes to connecting a mic. It will not record a signal from many mono mic plugs, because the signal goes to the wrong jack terminal. Test your mic with the iRiver set to both mono and stereo. Most mics will require that you use the “Stereo” setting unless you rewire the mic plug as described below.

Giant Squid makes a low cost mic that is specially wired to work with the iRiver in “Mono” mode. Some have experienced some hiss while using this mic. Using a very light bit of Noise Reduction in post will eliminate this.

The Sennheiser e604 has been successfully used by many to capture audio by close-miking the DJ’s speakers. This cardioid instrument mic is designed to handle very high sound pressure levels. To connect to the iRiver, you may use a Mono XLR to Dual Mono 1/8 and record in stereo or XLR to 1/8″ male with the “+” of the mic connected to the ring to record in mono. Use a volume setting of about 35 ”“ 40.

“I made my own adapter to allow using a mono mic with the iRiver in mono mode, because the iRiver records the right channel as the left when in mono.

I used Radio Shack parts and a stereo cable with a 1/8” mini plug.

“Cut the cable about 4 inches from the mini plug. Strip about Â¼ inch of the outer jacket, exposing the 2 wires and shield braid. Using an ohm meter, identify the “ring” lead, then cut the OTHER wire short. 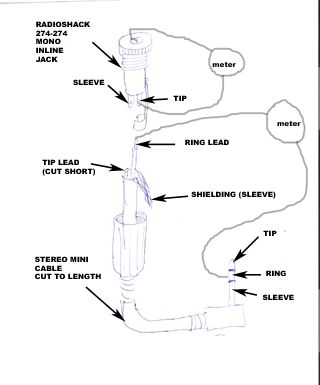 2 thoughts on “The Amazing iRiver Recorder”