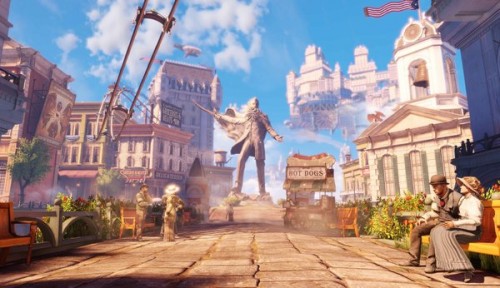 The City of Columbia in the game BioShock Infinite

for $22 from Amazon. See trailer below.

It’s my first video game in a long time and I was absolutely stunned by the quality of graphics, animation, music, and story-telling in this game. I was also quite surprised to find a remarkable review of it in Forbes Magazine. In it the reviewer says “I wondered if BioShock would turn from a great game to a legendary one by the time I was through.”

In a Nutshell
This is a first-person shooter video game, available for Windows, Mac, PlayStation 3, and Xbox 360 platforms. The year is 1912, the game’s protagonist, is a former Pinkerton agent named Booker DeWitt. His mission is to visit the floating air city of Columbia to find a young woman, Elizabeth, who has been held captive there for most of her life. You control DeWitt to bring her back to New York to pay off some gambling debts. When DeWitt rescues Elizabeth, they become involved with the city’s warring factions: the elite Founders that rule Columbia and strive to keep its privileges for White Americans, and the Vox Populi, underground rebels representing the underclass of the city. During this conflict, Booker learns that Elizabeth possesses strange powers to manipulate the space-time continuum in the city of Columbia. He also discovers that she is central to the city’s dark secrets.

The philosophical and scientific concepts of the story will astound you. Some of the game’s scenes include historical events from the turn of the 20th century, the concept of American exceptionalism, as well as influences from events such as the 2011 Occupy movement. After playing this game for a couple hours, I am not close to finding Elizabeth, but we both know that’s inevitable. The voice acting is first rate.

It is clear that video game graphics and feature films have intersected. The artists and programmers could have made this a feature film. In fact this has been going on since the mid-eighties with successful video games becoming feature length films. If you remember the films Tron or WarGames, video games played a large part in both films. But the technology has gone way beyond those films.

The ending, from what I’ve read, sounds just amazing. I will be up playing this game tonight.

Last year LucasFilm told attendees at a Technology Strategy Board event in London that video game engines will be used in film-making, and that the two disciplines will combine over the next ten years to eliminate the movie post-production process.

But Final Cut Pro, Sony Vegas, Avid, and Adobe Premiere don’t have to loose sleep just yet. On the other hand, look what producers can do inexpensively today with green screen, Adobe After Effects, rotoscoping and other special effect techniques. Perhaps it is inevitable that consumers will eventually be able to create their own digital characters and landscapes with inexpensive software that has evolved from the very expensive software used today to create video games and digital movies.

What do you think of this game?