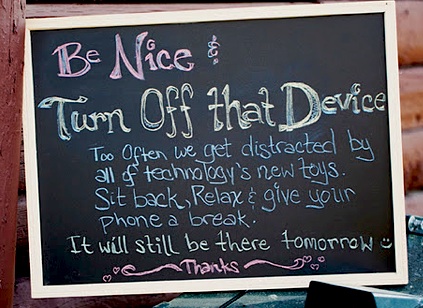 A notice at a recent event. Photo by Jodi Miller Photography

Do you take this woman to be your… WHO LET THE DOGS OUT, RUFF, RUFF.

In all my years of video taping Jewish events in the Temple, I never saw the same usage of still cameras as I see in churches, or in ceremonies held outside of religious houses. Temples have very clear rules about the use of electronics and it really keeps everyone (okay, maybe not the 13 year old kids so much) focussed on the ceremony and the family. This is good.

I agree with the sentiment of Unplugged Weddings, especially after being forced to set up my camera gear at the rear of a church because of a “no photography” policy. A policy that all the attendees completely ignored during the service. They even went so far as to walk up around the alter area to take pictures with their (then) cruddy camera flip phones. This was long before the amazing capability of today’s technology.

Nowadays, nearly every cell phone can shoot decent photos, and full HD video. I’ve done events with 15 year old Cousin Billy standing next to me, shadowing my every move, and using my camera light to provide good video for his point-n-shoot still camera. You know he’s going to make a video of it and show off his good work- his lighting, his framing, his years of experience as to when to be where to get the good shot. Etc. That’s to be expected, here and there, but it’s a growing trend, more and more, every day. 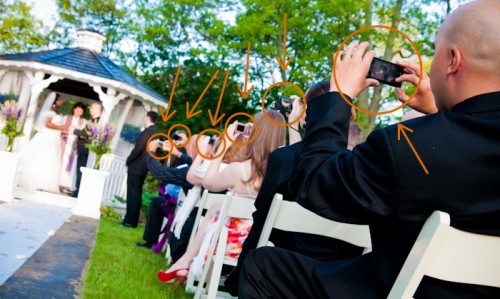 From Offbeat Bride ”“ Photo by Nora and Troy at Aurora-Photography

The photographer, Jessica Charles, includes a letter from a bride that goes on to give the reasons why, including the fact that the ceremony at the aquarium would be held in front of a floor-to-ceiling fish tank. 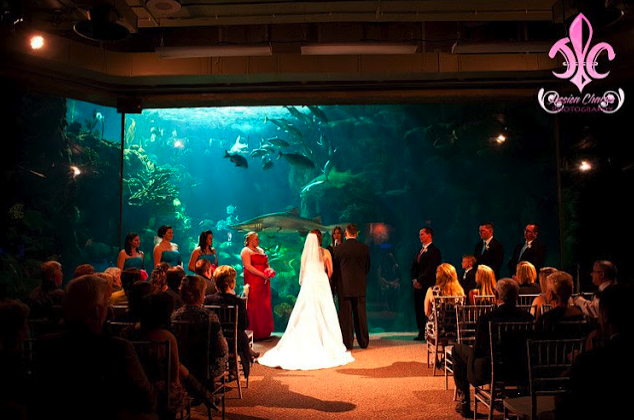 A nice and attentive crowd- not distracted by trying to take their own pictures or video.

We got married in front of a giant fish tank in low lighting and we knew that most people would not think and use their flash. That would cause a reflection off the tank, thus ruining the professional pictures we were paying for… even if we had picked a different venue, our decision would still be the same. For me, it was about respect for my photographers. We also chose this because because we wanted our guests to emerge from behind their electronics and be fully present in the moment with us.

So in talking about upcoming events with your clients, suggest going “Unplugged.” Even if it is corporate. The same rules apply. It certainly can’t hurt to bring it into the conversation- it costs nothing. But the benefits it can bring are great: keeping the attention of those attending, removing distractions.

For us, it removes competition- and obstacles like the nitwit who invariably stands right in front of my camera because that’s where the good shot is. But it also enables us to give our customers a better product.