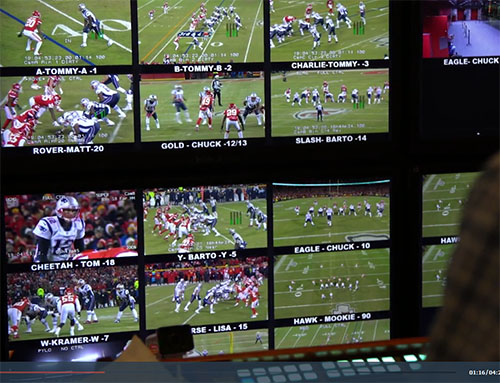 At 2019’s Super Bowl in Atlanta, CBS Sports had 115 cameras, including three SkyCams flying through the air, and 28 others squeezed into the pylons marking the edges of the end zones. As CBS’s Ken Aagaard said “You get these definitive shots right here on the sideline, all the way down to the 10 yard line…There isn’t a square inch on this field that we do not have covered.”

Replay producer Ryan Galvin knows that for every play he had just three seconds to choose which of those camera angles to air as an instant replay. There’s a digital tape machine for every camera. And each one has a name like leopard, Charlie, eagle which he has memorized with a hand-written map. Galvin has the help of 36 technicians who are controlling and watching all the camera angles.

One of my favorites was The NFL’s own commercial called “The 100-Year Game | SBLIII”
See 100 Year Game.

It’s just so funny and silly like a food fight in tuxedos. And it sells the idea of the fun of football. Unfortunately this commercial was much more entertaining than the game itself.

It’s a powerful ad that relies on minimal visuals. As a video producer, think about how this approach could be used in a commercial or promotional video you produce. It is the script and sound track that makes this one so powerful. You can get a lot of mileage from this concept.

Want to see some more funny SuperBowl Ads? 10 Funniest Superbowl Ads from the past.