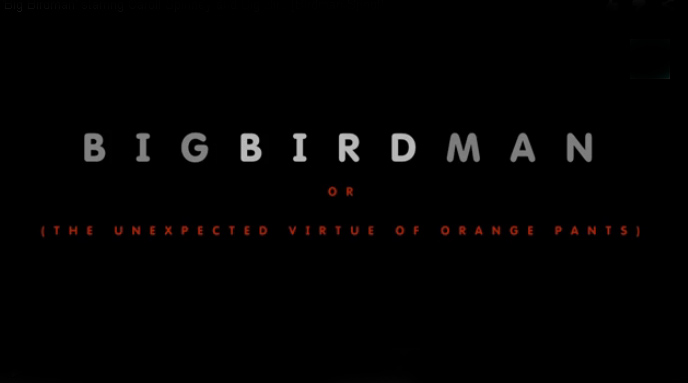 Looking for a great topic for your next video? Make a parody of a well-known film. The example above may get your creative juices flowing, but it will only be meaningful if you’ve seen Birdman which just won the Oscar for Best Picture on Sunday night. Below is the full length trailer.

The film is remarkable for its seamless look. You have to look closely to see the edits (they’re mostly hidden in pans.) These are long running shots relative to how most movies are produced. The questions is – do the longer shots contribute to the story-telling?

But I digress. Back to parody. Start brainstorming a scene that everyone knows. An obscure scene won’t get a laugh. Since your parody will not have the production value of the original so you will have make yours funny. Give it a twist or a double entendre that was not in the original. Play with the idea.

Look into the legal distinction between parody and satire. While a parody can provide an exemption from the copyright law, you could still be sued or have YouTube remove your video.

To be be considered a parody, a film has to be spoofing or making fun of either the original work, its subject, or style. It must be a humorous or ironic imitation of the original. The courts have historically held that parodies are a protected area of speech. But that doesn’t mean you will not hear from the creator of the original work. This is an important issue for filmmakers who produce parodies. Educate yourself by consulting an intellectual property attorney or a book like Clearance and Copyright: Everything the Independent Filmmaker Needs to Know. The author is an intellectual property attorney. I refer to this book often and highly recommend it.