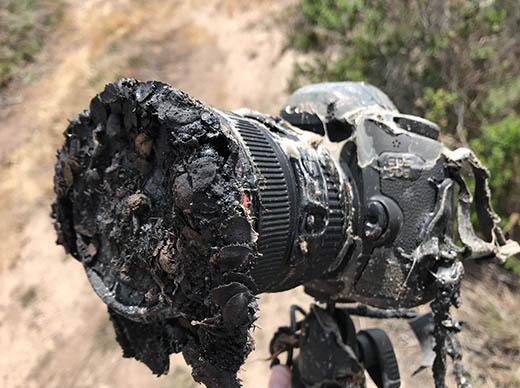 The SpaceX Falcon 9 rocket launch at Vandenberg Air Force Base in California on May 22, 2018 started a bursh fire which melted this Canon 5DS camera. The blast of the actual rocket launch was a quarter mile away. The blast did not melt the camera, but the brush fire did. Bill Ingalls, a veteran NASA photographer said “I had many other cameras much closer to the pad than this and all are safe. This was result of a small brush fire, which is not unheard of from launches, and was extinguished by fireman, albeit, after my cam was baked.”

However, the memory card survived and captured video and stills right until the camera was broiled. The loss of this camera was bad luck, because Bill had four other remote cameras much closer to the launchpad and those cameras survived and worked perfectly.