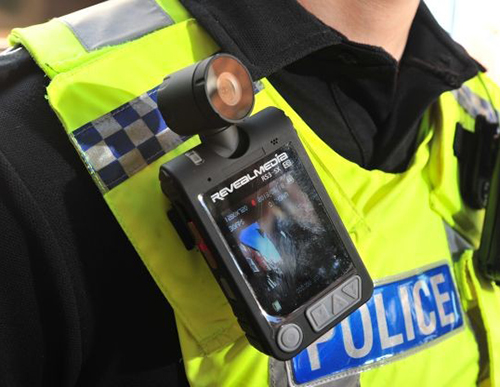 This is a promotional video from Reveal Media, a company which manufactures police body cameras. Other manufacturers include Panasonic and Wolfcom.

Body cameras also known as body worn video are typically used by law enforcement to record interactions with the public and to collect evidence at crime scenes. This video can make police and citizens more accountable for their actions. The first testing of body cameras on police officers was in 2005 in the UK. The UK policey later published a report saying that “evidence gathering utilizing this equipment has the potential radically to enhance the police performance at the scene of a wide range of incidents”. In 2010 over 40 UK police areas were using body cameras to some extent. A Scottish police unit called the Grampian Police initiated a trial of police body cameras in July 2010 which was later deemed a big success. It saved the towns an estimated £400,000 ($578, 080) a year due to the following:

If every interaction with the public is recorded, complaints about unnecessary force and shootings as we have seen in the US in Ferguson, Missouri, South Carolina and Baltimore, Maryland, citizen complaints, marches and lawsuits would be dramatically reduced.

If perpetrators every action is recorded by police, it is likely that guilty pleas would increase.

When the public is aware that body cams are standard equipment, the rate of assaults on police offices should be reduced.

In the US, the Albuquerque, New Mexico Police Department and Rialto, California Police Departments, have each experimented with police body cameras. In the Rialto Police Department they found that during the first year after the cams were introduced, the use of force by police officers reportedly declined 60% and complaints from citizens against law enforcement decreased by 88%.

Body-worn videos are also used in training. The footage can teach officers about how to conduct themselves with suspects, victims, and witnesses. Training itself would be more open to evaluation.

Legal procedures would be heavily influenced by this additional digital evidence especially when it is likely to have more credence than police or witness testimony that contradicts what can clearly be seen in the video.

One objection to using police body cameras is the cost, with professional body cams ranging from $400-$1,200. In addition to the cost of the body cam unit, there are also costs for data storage and administration, but compared to the cost of lawsuits and legal fees alone, this would probably on balance save money just as the Scottish police unit found. State and local legislators across the US have been considering whether body cams should become part of the standard law enforcement officer’s uniform. Police Officers would be required to wear the cameras for their entire shift. The batteries last for over 12 hours. The cams record HD video and perform very well in low light areas.

There are a number of issues that are being debated such as when to manually turn the cam on and off. There are situations such as interviewing a victim of sexual assault where for privacy concerns the recording should not be made. There are other privacy issues for both civilians and cops such as bathroom breaks. Some witnesses may not wish to be seen on camera. Many policies must evolve to handle these and other issues.

Professional police body cameras are made by Wolfcom, Panasonic and Reveal Media. Consumer versions are available on Amazon

On balance we believe that police body cameras should become a standard part of the police uniform as soon as possible. It’s hard to see how any honest citizen or police officer would not stand to gain. This relatively simple change could do a lot to improve our society. I urge localities to study the issue and consider a test deployment.