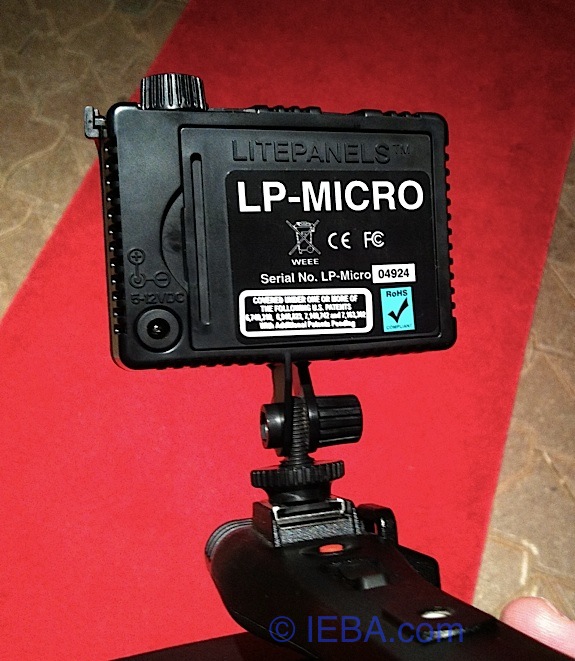 The compact Micro from Litepanels.

I had the opportunity to try out the Litepanels Micro on top of a Panansonic prosumer HD camcorder. After using budget LED lights from Amazon for some time, I was looking forward to how well the Litepanels LED light would “step up my game” by being a well, thought out professional tool, and not an LED light selected solely on price from Amazon or Ebay.

When I pulled it out of the box, I was surprised at the small size of the unit. Just about 3″ wide, 1.5″ thick and a little more than 3″ tall, not including the shoe mount adapter. It’s also only 4 oz until you put the batteries in. These batteries gave me a couple hours of use, and it was pretty heavy use as I was doing live IMAG on the high school prom floor, so it was on pretty much the whole time. Then it started to noticeably dim and I had to swap out for a fresh set of 4 AA batteries which finished the night. 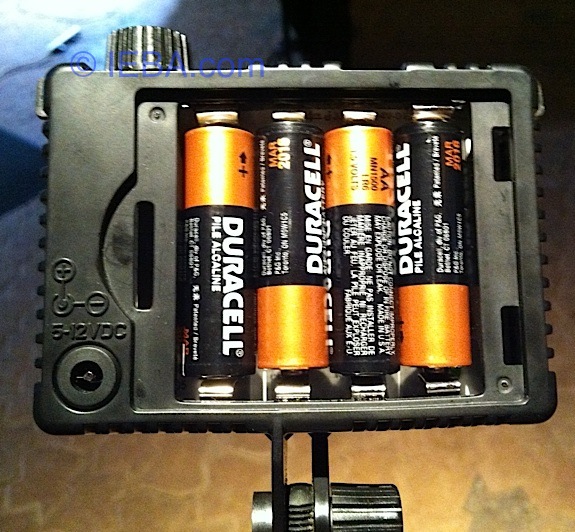 I was a little disappointed by the cold shoe adapter, which has been reworked in the current model, as I found it not able to really be locked into place. As tight as I could make it, a slight bump with my arm pushed the light askew. 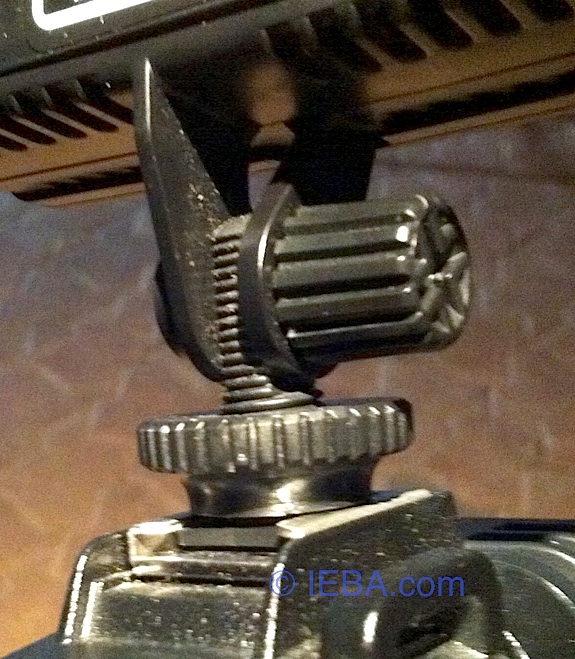 But during normal use, the light would stay where I put it. Turning or tipping the camera did not movie the light so if I didn’t bump it, the light was fine. This mount was just enough to hold the LED light. 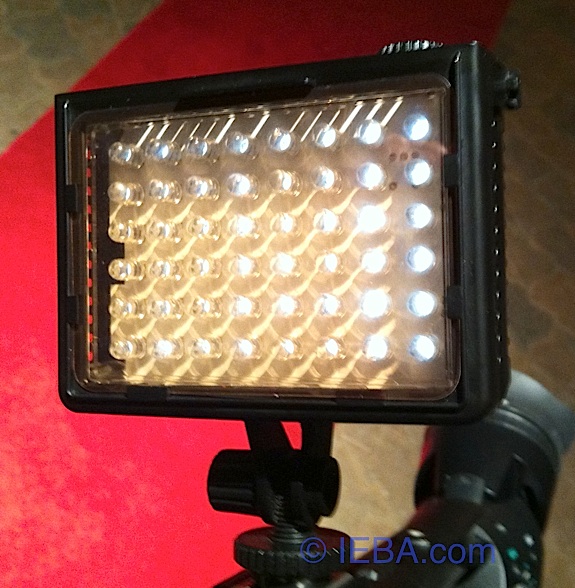 The 48 LED array on the front.

The Micro features 48 LEDs with a cool 5600k color balance. This means that outdoor use is correct and indoor use requires a filter. The Micro kit comes with two different tungsten filters to correct for indoor light, which I have in place here. The filters are thin pieces of stiff gel that you bend into place and then they fit into tiny slots on the face of the light and are held flat against the plastic surface over the LEDs. This works well in practice, but changing gels takes a bit of time. Adding & subtracting the frosted gel to try and widen the beam spread was too annoying to repeat, so I left it in place.

Speaking of the beam spread, let’s just say that the Litepanels Micro should be considered a “spot” light. 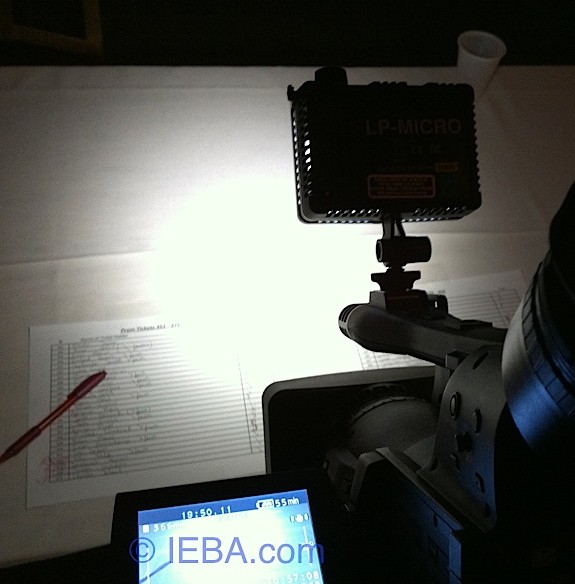 The "spot" beam spread of the Litepanels Micro LED light

Even with the mostly ineffectual frost in front of the LED light, the beam spread was only for the center of my image when the lens was wide. If I zoomed in half way, then the beam spread of the LED filled the frame. Good for more distant work, but not good for wide, close work, or widescreen HD cameras with more space to the sides. I was very disappointed that it wasn’t more even, and that the frosted gel didn’t have a more dramatic effect on the spread of the light. 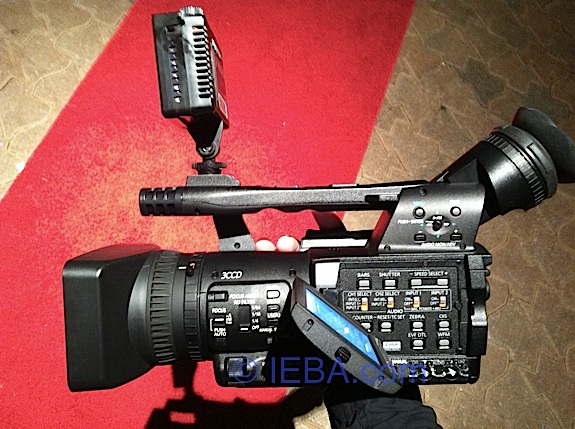 Small and compact does the job.

On the camera, the light’s small size and light weight were bonuses. I hardly felt the extra weight when using the camera, and it didn’t stick up that high. The dimmer on top allowed me to dim down the camera when people were getting very close, but also, considering the event, the camera’s auto iris also closed down, dropped the gain and the extra light was actually beneficial to the image. 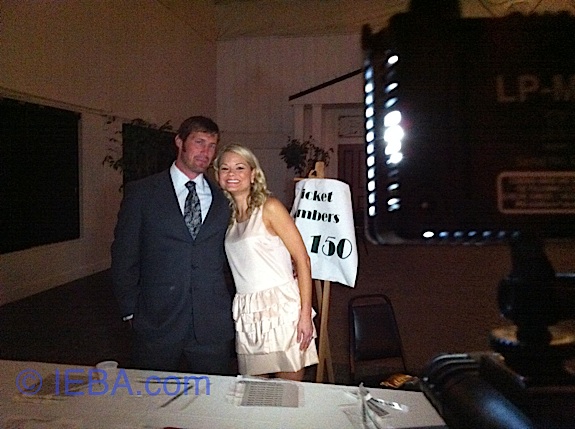 At a distance, the Micro does the job.

At a distance, the Litepanels Micro does the job, illuminating the subject in the center of the frame and providing a well lit image. If you need a wider spread, you’ll need to augment your filter package with more diffusion.

As for the price, it currently runs for about $275. This is about 4x more than my cheap LED light, which I actually like better. So do you get what you pay for when stepping up to a “name” brand in professional lights? In my humble opinion, not in this case. For $275, you get a small, and light fixture, but one that dies in a couple hours. For under $100, my budget LED runs off a camcorder battery for longer, has more LEDs, a wider natural beam spread, and more effective filters with magnets that let me pop them on and off with ease.

More on this budget light in my next review.