The Future of Smart Drones – The 3DRSolo 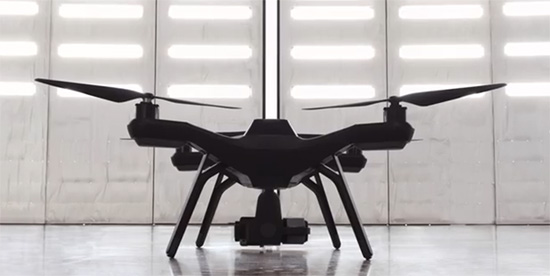 This drone has the standard “follow me” mode, but that’s just the beginning. Draw a line on your phone’s screen and the Solo will follow that line exactly, recording all the while. You can also select an object in your frame and choose “Orbit.” You get a perfect circle flight around the object you selected. Want the drone to lock on your face and fly away? Just put it in “selfie” mode and you will get a shot like those in expensive action films. Want to control your Go-Pro camera setting while flying? No problem.

These features give professional polish to aerial cinematography.

The 3DR Solo weighs 3.3 pounds and is all black. The controller looks like an old video game joystick. There is a holder for an iPhone or iPad. The phone or tablet is both a monitor and control for the camera. There’s a built-in flight simulator so you can practice without risk.

In a smart move, the company plans to open both the hardware and software in expectation that independent developers will make it the Android of drones.

This is from former WIRED editor-in-chief Chris Anderson who co-founded the company called 3D Robotics. The drone will sell for $1400 with a Go Pro or $1000 without starting in May, 2015. This may well be the future of smart drones.