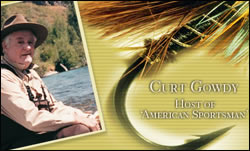 I first met Curt Gowdy when I was working for The American Sportsman, an ABC Sports show that could be seen on Sundays during the 1970s and 80s. The show was devoted to hunting, fishing and adventure. My job of Equipment Manager involved carrying lots of cases.

Curt was the host of the show. We traveled all over the US and beyond to film show segments with celebrities from sports and entertainment. I recall shows we did with Curt and Mariel and Jack Hemingway hunting wood duck in Jackson Hole Wyoming; Quail hunting with Bruce Jenner; Bonefish fishing in the flats of the Florida Keys with Herve Villechaize, Tarpon Fishing in Tarpon Springs, documenting (but not hunting) the migration of Canadian Geese down the Delaware, Elk Tracking (but not hunting), skin diving off Cuba, Tuna Fishing in Newfoundland and many more. What an amazing job I had!

Many of these shoots were physically demanding and dangerous. Much of the fun is that when working with a small group of people for a week or so, you become like a family unit. A lot of what makes that work comes from the top down. So while Curt was the star and father figure, he tied the group together because he was very professional and a lot of fun. There was always an ABC producer with us such as Bob Duncan, Glen Giere, or Mark Lucas leading the small army/family unit that a crew becomes. Theoretically, the ABC producer was running the show, but it was clear that they were working for Curt rather than visa versa.

On each shoot there were maybe three to eight freelancers including cameramen, assistant cameramen and sound men. The freelancers I worked with on American Sportsman included some of the best in the business such as Peter Henning, Bruce Buckley, Andy Rowe, Scott Ransom, Hank Holton, Alan Schneider, Jimmy Lynch, Dave Conley, Doyle Smith, Bruce Perlman.

This was a successful show that, even though it was bounced around in the schedule by ABC, it became the prototype for this type of show. Imitators could never match the kind of fiercely loyal audience drawn to American Sportsman. As Curt told an interviewer for Sports Afield magazine in Feb 2002, “I think the appeal of The American Sportsman was that it had a film-like quality. It was more than just a hunting and fishing program. Every episode told a story. We had a big budget and the best people in the business working on that show – the best producers, editors, cameramen, and soundmen. Not like today where the host and a single cameraman do everything on an outdoor show.”

Hunting and fishing are unpredictable activities. The freelancers joked that we had many hours of excruciating boredom punctuated by moments of sheer terror. The show was filmed in 16mm film. Those film cameras were really the only way you could do it in those days. We used Eclair 16 mm cameras called NPRs and ACLs for most of the work. High speed cameras like the Photosonics could shoot up to 1000 frames a second and make exquisite slow motion.

But the sound recording was one of the most difficult aspects. The sound man had to be pretty clever sometimes hiding mics behind bushes and rocks. “We soon employed shortwave microphones,” says Gowdy, “which was a first in the history of television. It allowed us to record every bit of conversation, and little things that made the experience more vivid to the viewer like the crushing of gravel under your wader boots or the cackle of a rising pheasant.” Today these mics are called wireless mics. The sound was recorded on Nagra tape recorders which were worn on the shoulder. In some cases a miniature Nagra SN was hidden on the talent to provide more flexibility 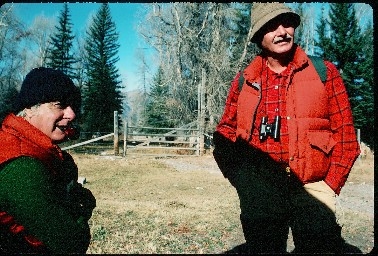 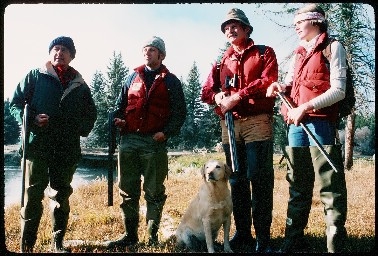 Some people with as much clout as Curt had could become demanding, but Curt never was. He was a true gentleman, patient and fun. He set the tone for the entire week or so we were on the shoot. Traveling and working outdoors with these documentary crews was some of the most fun I ever had in the TV business. Sitting for many hours in a cold duck blind, all day bouncing on the bow of a small fishing boat waiting for a Tarpon to be hooked and to leap high out of the water, sitting very quietly in complete camouflage before sunrise waiting for turkeys.

Long before I had the honor to work for him, Curt was an award-winning broadcaster. His broadcasting career began in Cheyenne, WY, in 1944 where he would stand on a milk crate and announce football games often in subzero temperatures. In 1949, he did play-by-play announcing for the New York Yankees and then two years later for the Boston Red Sox.

Curt Gowdy was inducted into the broadcast wing of the Baseball Hall of Fame in 1984 and the American Sportscaster’s Hall of Fame in 1985. Gowdy won six Emmy’s for his work on American Sportsman and nearly every celebrity appeared on the show at one point or another. As Gowdy said, “All these guys explained to me why they liked coming on the show: because they loved the outdoors and loved getting away from Hollywood and everything phony there.” Curt was the perfect person to make that happen.

PS. Sorry, I do not know where you can buy the American Sportsman shows on DVD. If you know, please contact me.