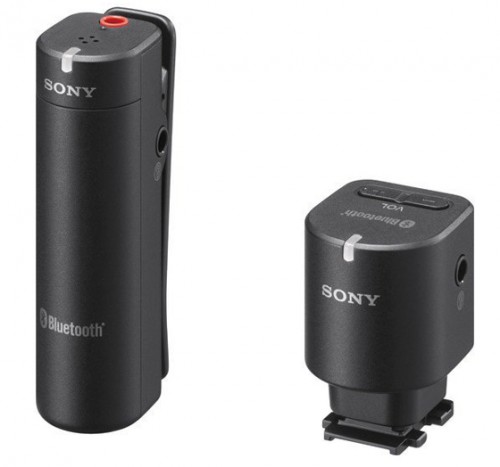 uses Bluetooth technology to make a wireless connection to your camera. It attaches thought a proprietary Sony multi-interface shoe. This is not compatible with all cameras, even Sony cameras so the first thing to do is to check that your camera has a multi-interface shoe. The receiver that attaches to your camera is very small (1.1 x 1.5 x 1.1″) . The transmitter/microphone is larger (0.7 x 2.6 x 1.2″) and has a volume switch and includes a windsock. It is powered by one Triple-A battery. There’s a single ear phone for the camera operator.

When you power up the devices, it takes only a moment for the blue lights to turn solid indicating a good blue tooth connection. Sony claims the range is 100 feet and that appears true. The mic’s bright blue LED light would need to be taped over with black gaffer’s tape. You surely wouldn’t want that on when your shooting. As small as the transmitter/mic is, it is larger than the head of a lavaliere mic so you will need to give some thought to hiding it effectively. It has a 3.5 mm mini headphone jack so you could plug a better lav such as a Giant Squid Mic into the transmitter. The transmitter is mono.

It’s all-plastic construction so this makes it very lightweight and small, each module is less than an ounce. The sounds quality is pretty good when the mic is close which is true for most mics. It’s probably not a good choice for narrative filmmaking, but despite some shortcomings, not a bad wireless for the money.