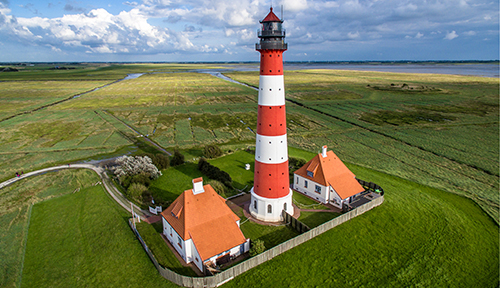 The following essential drone shots are courtesy of Pond5. These and other aerial shots may be purchased directly from https://www.pond5.com. While there are many variations of these shots, aerial cinematography can be broken down to five basic shots.

On a tripod a pan is made just by moving the camera on a vertical axis from one side to another from left or from right. The viewer can see a very wide view of the landscape. An aerial pan can be made while the drone is hovering one spot. It can also be moving forward, back or to the side while panning. The aerial pan could follow a person or object moving from left to right or vice versa. Or it might simply reveal more the background. The aerial pan shot is a good way to highlight the landscape and show proximity to the surroundings. Panning left to right and then right to left provides more options in post.

A tracking shot is moving parallel to a person or object which is also moving. A tracking shot is most often what you see when you watch a horse race or a football back running toward the goal. Like a ground-based tracking shot, the aerial version requires some coordination to keep the camera moving at the same speed and direction as the subject.

A pedestal shot began with a camera crane moving the camera, for instance, from inside a crowd of people straight up so the camera sees how large the crowd is and where it is situated. The pedestal shot usually wants to reveal something which only visible from a higher vantage of the same position. An aerial pedestal shot may simply reveal more of the background, but it can also be used to reveal something that was not visible from the lower view. Keeping the drone in the same position, not flying forward or back, then simply adjust the altitude to make it go straight up.

Aerial – Rising Through the Clouds by Airman

A flyover can work as an establishing shot to indicate where and what time the following scenes take place. Flyovers can simply be beauty shots like the many flyover night shots of New York City. A lyby cn work with a pan or tilt or just be locked off.

Flyovers between scenes can, like a dissolve, evoke a sense that time is passing, though the location of the following scene is the same as the previous scene. In the TV show “Two and a Half Men,” the flyover of the beautiful beach next to Charlie’s house was used in just that way.

Flying Over and Looking Down at Soccer Field by VIAFilms

The shot is composed to show just part of a scene. When the camera moves a wider view reveals something else that in a suspense film if usually bad news for the protagonist.

An aerial reveal often starts by flying low to the ground, pointing down with the aircraft pointed toward the subject. When you tilt up, you reveal the subject.

Keep an eye out for shadows and other distractions in the shot. After you’ve made the one or two shots you had planned, use the remaining battery time to explore. You never know what you might discover when you are above the trees.

Editing these shots can be pretty easy since it works well to cut on motion. But if the intention was to stop movement on a particular view, you’ll want to plan and rehearse that stopping point. These essential drone shots are often used to open a scene or close it.