A Standing Desk For Video Editing 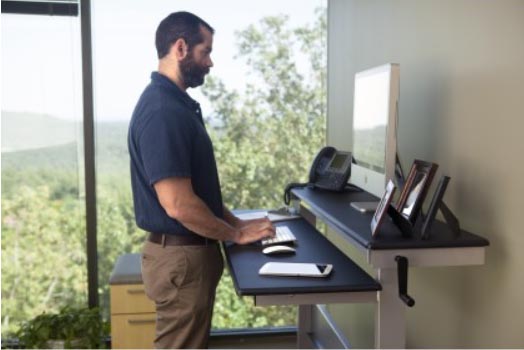 In video much of our work is done at our computers. Everything in post production encourages us to sit. As Oscar-winning editor, Walter Murch, says “I would encourage anyone who is an editor to stand while you edit.” There are some good health reasons to do so. Many editors have back pain from so much sitting. As reported in The New York Times there is evidence that sitting all day brings higher risks of:

A study from the American Cancer Society showed a direct correlation between the amount of time people spend sitting and mortality rates. Sitting all day is just not healthy. According to a study of three schools in Texas, even kids do better standing. When given the opportunity to stand during classroom time, they burn more calories and appear to have greater attention spans.

You don’t want to stand all day either as there are health risks to that too. Best, is probably to use a variety of positions during the day. At the very least you should get up every hour or half hour and walk around or get some exercise.