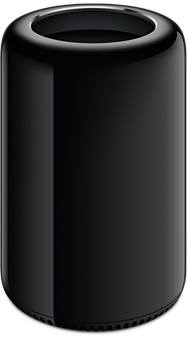 The Apple Mac Pro certainly looks different. This futuristic shiny new cylinder is aimed at video editors and others who work in graphics, and music. Apple considers it to be portable and even thought it has a built in handle, the shape of it just doesn’t seem that portable. While prices for the Quad Core version start as low as $3000, there’s also a model with an eight-core Intel processor, 64 gigabytes of extremely fast memory (most video editors have 16GB); two AMD graphics cards and a fast one-terabyte solid-state hard drive. That version is over $8000 before adding a monitor, keyboard and mouse. But they do give you free shipping.

This Mac Pro will render 32 gigabytes of HD video into another video format in about an hour. On a quad-core Mac Mini this would take over three hours. 4K video is coming to all of us and that’s what this machine was intended for.

When a freelance designer and video editor tested the system with some 4K video, he found that importing the footage into Final Cut Pro X showed no problem previewing and playing the 4K files. But add some filters and color correction, and FCP X suffered slow playback and dropped some frames.

While the shape of this machine may look more interesting than the rectangular box, there’s no room for extra hard drives like there was in the original Mac Pro tower. Apple’s answer is the Thunderbolt ports where one cable can connect up to six devices. Thunderbolt also allows very fast data transfers. The Mac Pro has four USB 3.0 ports as well as six Thunderbolt ports.

Thunderbolt is a new peripheral-connection technology that combines data, video, audio, and power in a single connection. It is now available on both Macs and PCs. A Thunderbolt channel can theoretically provide up to 10 Gigabits per second (Gbps) of data throughput, but 8Gbps is more realistic. Each Thunderbolt port includes two channels. Thunderbolt is much faster than USB 3.0 or Firewire 800.