Below are a few excerpts from a terrific UK site by Darren Meldrum TV Test patterns from around the world. Darren’s site includes test patterns from the BBC, Australia, Singapore, Ireland, Sweden, North America and lots more. 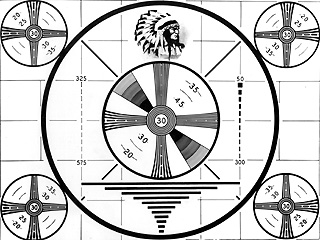 Probably the most famous American B&W test pattern is the so-called “Indian Head” monoscope pattern. This pattern was originated by RCA in 1939; it was designed to be generated using a special tube called a monoscope, a CRT which had a metal plate target on which the pattern was printed. The black lines of the pattern would interrupt current flow as the pattern was scanned to provide the desired video output. These tubes could only handle black and white – no shades of gray hence they had to be simulated either with a halftone dot pattern or with patterns of fine lines. 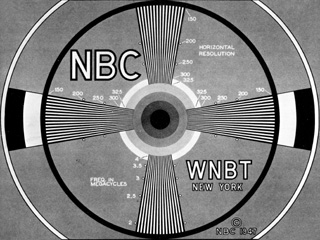 This NBC test pattern is dated 1947 but actually dates back to 1941, when commercial TV broadcasts began in America. 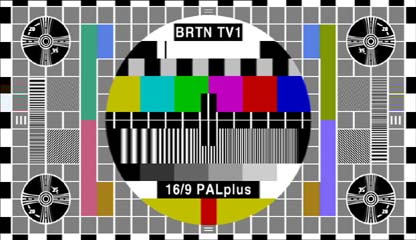 This is the 16:9 PAL version of the Philips PM5644 test pattern as used by BRT, the Dutch-language Belgian broadcast organization.