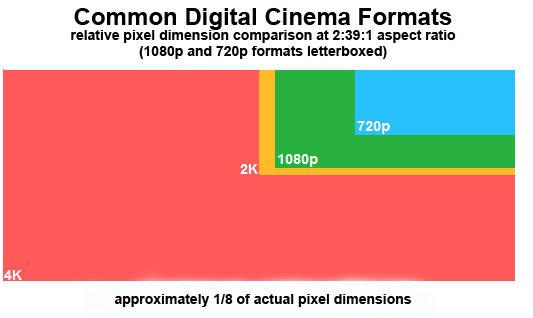 Digital cinematography is similar to film cinematography in that each captures a series of still images, typically at 24 frames a second. Unlike film, the digital images are captured to hard drives or to flash memory. Previously these video moving images were recorded to digital video tape. And of course 35mm film was the standard before that. While there are no hard statistics, it seems safe to say that today most feature films are shot at least partly in digital video. There are worthy discussions on the pros and cons of film vs video. For instance see The NY Times: How Digital Is Changing the Nature of Movies.

One big advantage of digital video is that you do not have to wait for the lab to process the film so dailies are available instantly. Another advantage is cost. For the studios it costs about $1,500 to print a copy of a movie on 35mm film and ship it to theaters in a metal container. When you are sending out 4000 copies, that’s $6 million compared to cost of the digital copy which is only $150 times 4000 which is $600,000, a tenth the cost.

A disadvantage is that digital is a poor and unreliable storage medium while film can last 100 years. Five years after the first “Toy Story” came out, producers wanted to release it on DVD. When they looked at the original animation files, they discovered that 20 percent of the data had been corrupted and was unusable.

Many smaller theaters like Art House cinemas are being forced out of business as the cost to upgrade to digital projection is prohibitive for these small businesses. So despite the pluses, there are significant downsides to going digital.

George Lucas, producer of the Stars Wars franchise, used Sony HDW-F900 HDCAM camcorders with high-end Panavision lenses in 1999 for his film “Star Wars Episode I: The Phantom Menace.” There is disagreement on whether this is the first big budget live action movie shot entirely on digital video. Some say that 35mm film was also used. Lucas later proclaimed that all of his future films would be shot in digital video. Compared to 35mm film, HD video is much cheaper. One of the producers of that film said they spent $16,000 on 220 hours of digital tape, and they would have spent about $1.8 million on 220 hours of film.

Video formats are usually named relative to their vertical resolution for example 1080p is 1920 pixels wide by 1080 pixels tall. But digital cinema formats are specified in horizontal resolution. They are described as so many times 1024. So a 2K image is 2048 pixels wide, and a 4K image is 4096 pixels wide. But the aspect ratios can vary.

All digital cinema formats are progressive scan, and 24 frames a second which is also the frame rate for film.

The camera sensors capture images using CMOS or CCD sensors. Like DSLR cameras digital cinema cameras often use just a single sensor ranging in size from a 16 or 35 mm film frame to as much as a 65 mm film frame.

Digital Cinema Cameras can be made with PL, PV and similar lens mounts which enables them to use the wide range of existing high-end cinematography lenses. Their large sensors also let these cameras achieve the same shallow depth of field as 35mm motion picture film cameras, and shallow depth of field is an essential creative tool.

There are a number of video cameras on the market designed specifically for high-end digital cinematography use. These cameras typically offer relatively large sensors, selectable frame rates, recording options with low compression ratios or in some cases with no compression, and the ability to use high-quality optics. Some are expensive and one is only available to rent.

Some of the most used professional digital cinema cameras include:

Panavision Genesis (available for rental only)

Independent filmmakers have used much lesser quality cameras for digital filmmaking. The “Blair Witch Project” was shot in 16mm film and Hi8 video (Standard Definition) and made a ton of money.

Some well-known directors such as Quentin Tarantino have criticized digital cinema. Tarantino sticks with and strongly recommends film. Tarantino has even suggested he may retire because with theaters are dropping film projectors, his films may no longer be able to be projected in 35mm in most movie theaters. These days some 35mm films are transferred to digital so they may be projected by digital cinema projectors.

The DP is responsible for the technical and artistic quality of the images. Some of the tools at his or her disposal are lighting, lens choices, composition, exposure, filtration, film or digital selection. He or she works with the director to ensure that the visual aesthetics support the director’s vision of the story. The DP is in charge of the camera, grip and lighting crews.

The camera operator physically operates the camera maintaining composition, camera angles, and framing. He must alert the first assistant if the shot is out of focus.

The first AC is responsible for maintaining focus of a shot including when the camera and/or the action moves. Out of focus is unacceptable. The work of the first AC is considered the most difficult job on the set.

The main job of the second assistant camera (2nd AC) is loading the raw film stock into camera magazines (on a film shoot), operating the slate or clapperboard at the beginning of each take, measuring and marking the distance to the actors as necessary to help the first AC, and maintaining paperwork for the camera department. The Second AC helps the First AC.

The DIT is a new position in the digital cinema industry. (see below)

A Steadicam Operator is someone who is skilled at operating a Steadicam or other camera stabilization system. This person is often one of the Camera Operators and may also operate a camera on a tripod or dolly when not needed on the Steadicam.

This Motion Control Technician operates a motion control rig. This is a robot camera that can consistently repeat exact camera moves so the footage can be used in special effects. The rig and the operator are usually hired together.

The Digital Imaging Technician, or DIT

This job was created as a response to the transition from the long established film medium standard into digital cinema. The DIT works for the Director of Photography to help create the images he or she wants electronically by tweaking the digital cameras. This may include: monitoring exposure, setting up “look up tables” (LUTs: a computer term), camera settings, and media management.

It is also the responsibility of the DIT to backup and archive the digital data, create compressed dailies from raw footage and prepare all digital images for post-production. The DIT manages the metadata for use in post, identifies and corrects issues with corrupt files and helps set the camera and monitors according to how the DP wants the project to look.

The DIT sets up a “DIT station” to manage and back up all the raw footage from the shoot. The station has power supplies for Laptops, RAID arrays, battery chargers, monitors etc. Rarely, the DIT will run the station entirely from batteries in a ”˜run and gun’ situation. While most DITs probably build their own workstation, you can buy a complete DIT Station here.

A DIT talks about his work

DMT: (Digital Media Technician) who works with the files only after they have been recorded and does backups of the files.

Many if not most of the movies you see in movie theaters are projected with digital technology rather than film projectors. It is common to transfer 35mm films to video so they may be projected digitally as well. A movie can be distributed to theaters via hard drives, the Internet, dedicated satellite links or optical disks such as DVDs and Blu-ray Discs.

Digital Cinema Initiatives (DCI) is a joint venture of the six major studios. In 2005 they published the first version (V1.0) of a system specification for digital cinema which was updated in 2012. Only four manufacturers make DCI-approved digital cinema projectors; these are Sony, Barco, Christie and NEC.