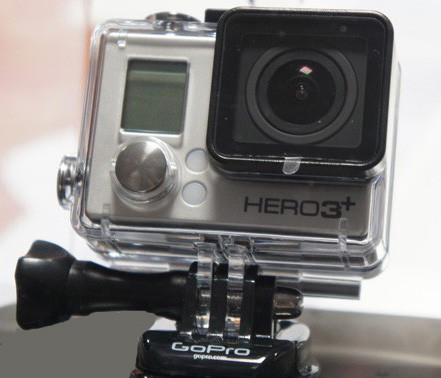 I liked that video so much, I had to watch it twice. I kept looking for time lapse footage. Was it there or did I miss it again? In any case it was all shot with the GoPro Hero3+.

It records in high-frame rate 1440p48, 1080p60, 960p100 and 720p120 video modes. 120 frames a second is not bad for an inexpensive camera. It’s time-lapse mode can capture at 0.5, 1, 2, 5, 10, 30 or 60 second intervals. They also improved the sound quality and added advanced wind-noise reduction technology. The GoPro App lets you control the camera remotely with a smartphone or tablet. There’s also a silver edition which saves $100 by reducing some of the features.

There is still the rolling shutter or jello issue, but that can be eliminated by using a neutral density filter which will slow down the effective shutter speed. One user says he can shoot you can shoot above HD resolution, de-fish it, and render at 1080p and get really good results. Another says that with that many frames it’s easy to produce slower motion by using a slower time line using their included software.