Shutter Speed, Iris, Depth of Field, and a Review of the Genustech ND Rotating Filter 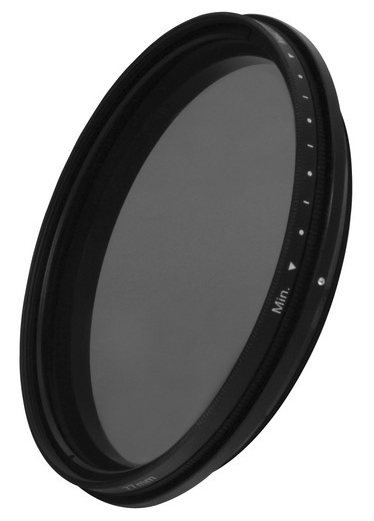 A neutral density filter cuts down the amount of light that reaches the sensor. Each ND filter is designed for a specific strength from one stop to eight or more stops. These glass filters are screwed onto the front of the lens to reduce the light. This is one way to control the depth of field of a shot. Depth of field helps separate subjects from their background. It is a major creative tool in video, film, and photography. Until recently it was more difficult to achieve a shallow depth of field in video. But DSLRs and the new large-sensor video cameras have changed that.

In addition to controlling depth of field, the ND filters can also enable slower shutter speeds which slightly blurs the frame giving a smoother look when played back.

Shutter speed effects clarity of motion in video. A slow shutter speed slightly blurs the frames so they look smoother in playback. A fast shutter speed, on the other hand, records a series of very sharp frames that may look good as stills, but are choppy in playback.

The combat scenes of the film “Saving Private Ryan,” have a staccato-like look thanks to the faster shutter speed. Google “video shutter speed tests” to see the effects of shutter speed. Better yet, try your own experiments with shutter speed. Shoot a moving subject, perhaps water at 1/60th, 1/200th, and 1/30th of a second and study the differences.

Back To ND Filters

It had been years since I used a glass Neutral Density filter. Back in the film days, cameras did not have dial-in ND filters like many video cameras do today. So when I bought my new Sony EA50, I was prepared for this drawback. It’s the same for DSLR cameras. Neither the EA50 nor DSLR cameras have built-in ND filters, but they can both make shallow depth of field shots.

I would need an external ND filter for this new camera. I’d heard about the Genustech screw-on filters. They also offered a separate round rubber sunshade. I was told to expect a vignetting problem (where the filter ring or some part of it is visible at the edge of the frame when the lens is wide.) But I was pleasantly surprised. This filter itself did not vignette. The sunshade did vignette at 18mm, but only when it was extended. This rubber type of sunshade collapses when pushed in from the front. It will work fully extended at all but the widest focal lengths.

This type of rotating ND filter becomes darker as it turns. So instead of owning several different ND filters, you can do it all with just one. The rotating filter creates 2 – 8 stops of neutral density. This means when shooting in full sun, you don’t have to stop down to f22 and increase the shutter speed dramatically. You can shoot at 60th of a second shutter speed and, depending on how much neutral density you dial in, you could open the iris to a mid point and produce that lovely bokeh effect which throws the background out of focus while keeping the subject in focus.

This is actually a polarizing filter and because of that it does make slight changes in color, but they were not discernible to the naked eye. Here’s the first thing I shot with this new filter. It has not been color-corrected except for a couple exposure tweaks.

any top end photographers prefer the traditional ND filters which come in ND 3, ND 6, ND 9 etc, for one stop, two stops, three and more. In many situations this works well as the sun is fairly consistent most of the time so one filter may be all you need all afternoon. But when the light changes, you may have to change to another ND filter. This, of course, takes time and may even result in a missed shot. This is where the rotating filter excels. When the light changes, simply turn the filter another stop or two. This is a lot faster than removing one filter and replacing it with another.

A potential problem with any threaded filter, is cross threading the screw threads. Screw-in filters are not quite as easy to screw on and off as a bold and nut. Since they are two or three inches wide, you could cross thread the filter when screwing it on or off. If you feel this happening, stop turning and reverse it a bit!

If the filter becomes stuck or cross threaded, try using your flat hand across the front of the whole face of the filter ring. Press firmly abd inward as evenly as possible as you rotate your whole flat-hand counter-clockwise. There are various more drastic solutions you can find on the Internet, but it’s not hard to avoid cross threading if you turn it slowly until you know the threads are aligned.