The Art Of Film And Video Editing Part-4

When sound technology was added to film, there were a great many new opportunities for creative story-telling. Ironically the advent of sound made some editors less creative. The sound alone could easily carry the story so the director and editor did not have to work so hard to tell the story in pictures. TV dramas use this technique extensively. Even documentaries are affected as the narration takes the biggest burden of story-telling.

Walter Murch, editor and sound designer, is the only editor to have received Academy Award nominations for films edited on four different systems:

Murch begins his editing process with the sound turned off. As he says, “If I had the sound up, it would tend to take all of my attention… It would crowd out the possibilities for other sound. And then only after the scene has found its shape, I turn the switch on and let the sound come in. And frequently there will be two sounds that come together, two lines of dialogue and I’ll think, that’s great that that happened by accident.”

Silence is, in fact, one of the most important tools to the sound editor. A moment of silence can be more important than the dialogue or sounds. Just as with music, the moments of silence give emphasis, shape and structure.

Turning the sound off can be a helpful way to study a film. The sound will not distract you or add emotion. It is easier to see the structure and especially the editing of a film without sound.

Want to study an amazing film sound track? See Robert Altman’s 1975 film “Nashville.” The film was created as an homage to country music, but it is also a tribute to the 24-track audio technology that dominates the music industry. It’s no coincidence that the film also revolved around 24 characters, each with his or her own sound track, making it just as much as an ode to the sound mix and the engineers behind that mix. Robert Altman’s innovation and mastery in sound is just part of his filmmaking genius.

Hollywood Style Editing – Who is really in charge?

In the early days of film, film editing was a process of physically cutting and pasting pieces of film together. 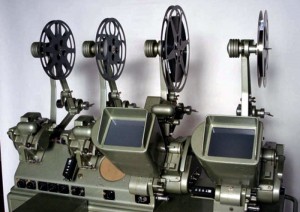 From the original film negative a positive copy was made called a workprint or cutting copy. This was threaded through a machine with a viewing screen like the Moviola above. The editor and director would view a copy of the daily footage called “dailies,” cut out the bad shots and “splice” the good pieces of film positive together to make a complete, rough draft of the whole project. This cut would also contain sound from the filming, but typically the sound would be re-dubbed later. This rough draft was called the Editor’s Cut.

When the shooting was completed, the director and editor would work together on the entire film, removing and rearranging scenes. There are 24 frames in every second of film and adding or subtracting just one frame from a shot can make an enormous difference. The process continued until the director was satisfied. The result was called a Director’s Cut.

Then, the non-creative process of film cutting began, a process of preparing the original film negative that was conducted with gloves on in a dust-free environment. The person who did this was called the negative cutter, a term you still see in movie credits today.

The Final Cut was the complete, finished product presented to the producers or movie studio. Further changes might be suggested, and sometimes disagreements between studio and director caused the director to disavow his involvement with the project.

The dispute over which version of a film the audience will see is a common problem. The producer of a film can insist on his version of the film and may suggest that the director take his name off the credits and instead use the pseudonym, “Alan Smithee” which is the Writers’ Guild-approved name for such situations.

Some directors are given a chance to show their vision of the film as a Directors Cut. Some Director’s Cuts have been shown in theaters first as was the case with “Das Boot” and “Blade Runner.” “Blade Runner” (1982) profoundly influenced the look and feel of science fiction films. Director Ridley Scott was forced by the studio to add a voice-over by Harrison Ford and to give the film a traditional happy ending in place of what Scott had intended.

Ten years later, Scott was finally able to release his version called “Blade Runner: Director’s Cut.” This version removed the voice-overs and included the ending he had originally intended. The dichotomy between the director’s cut and the studio version is not simply the director’s artistic vision versus the theatrical version. In some cases it is simply a marketing ploy. In others it is a longer version of the film. Don’t assume something called the Director’s Cut is always the film the director wanted you to see.

Terry Gilliam (of Monty Python fame) has directed films such as “Time Bandits” (1981), “Fisher King” (1991), “Fear and Loathing in Las Vegas” (1998) and this author’s favorite, “Brazil” (1985). The theatrical version of this film is twelve minutes shorter than the Director’s cut. Unfortunately many of the edits in this theatrical version just don’t work. While it is still very funny, many purists think it is an abomination. The war between the studio and Gilliam are recounted in the book The Battle of Brazil.

This continual battle between studio and director is the subject of a feature film entitled “An Alan Smithee Film Burn Hollywood Burn” (1998) (onscreen it is called “Burn Hollywood Burn”). It was regarded as one of the worst films of all time. As a result of this film, the Directors Guild of America decided to officially discontinue the Alan Smithee pseudonym credit in 2000. This film is about a director who tries to disown a movie. It gets so bad that the film’s real director, Arthur Hiller, after seeing the studio’s version asked that his name be removed from the credits!