Edward has been Using Sony Vegas since 2000 as his video editing platform of choice and has written several automation scripts. Excalibur, and his other scripts, are tightly integrated with Sony Vegas Pro. This plug-in was the first to add multi-camera editing beginning with Vegas 4 and automates many other aspects of Vegas. For more information, visit http://www.jetdv.com/.

NAB is often the launching point of many new products and this year is no different. At NAB, Sony brings a new version of Vegas to the table adding many new features.

Upon first opening Vegas, you will see an entirely new look. The interface now uses a darker palette which is much easier on the eyes when working in a dark environment. If you prefer the previous color 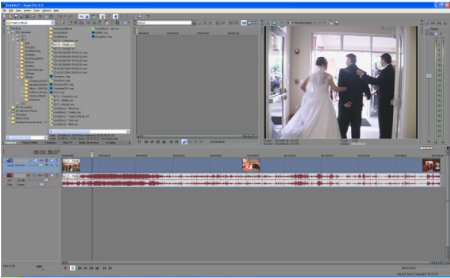 You’ll also notice the default screen layout has changed. The trimmer window is now docked separately and the audio levels window is now right of the preview screen. Naturally these can all be changed as desired for those of us who seldom use the trimmer and would prefer the extra screen real-estate. The new layout is in keeping with the new trimmer preview and editing options. As of Vegas Pro 8.0c, previews started defaulting to the hidden trimmer tab which was confusing for many users. With the trimmer now a separate dock, previewing in the trimmer is obvious. Plus the new layout is much closer to other NLE’s which have two preview screens. This makes the conversion from other NLE’s to Vegas more comfortable.

Once you get past the new look – what’s really new in Vegas Pro 9.0? First of all, both 32-bit and 64-bit versions are now version 9.0. Unfortunately this means you’ll really need to further specify which version is being used when asking questions. The good news, however, is that the 64-bit version is tremendously more stable than Vegas Pro 8.1.

Have you been dying to work with 4K video? Vegas now has 2K and 4K defaults. The width and

height can both be set to a maximum of 4096 – double the previous maximum. Combined with new support for opening and editing .r3d files from RED ONE, the possibilities in Vegas have been greatly expanded.

Under File – Properties is another new option called Adjust source media to better match project or render settings. When turned on, Vegas will make minor tweaks to the source media properties to allow those media files to work better with your project. This can include minor cropping or padding of the frame size and adjusting interlacing.

One huge format support change deals with still images. Scripts are no longer required to export still image sequences. Now you can choose File – Render As and Image Sequence is directly available. 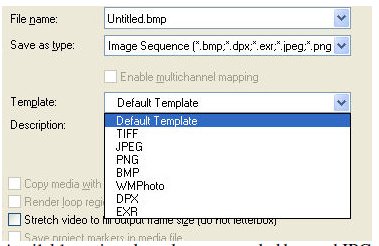 Available options have been expanded beyond JPG and PNG to also include TIFF, BMP, DPX, EXR, and WMPhoto. Improved performance when working with high-resolution images and better support for giga-pixel stills has also been added. Adding new still images on the timeline has also been improved. Under Options – Preferences – Editing tab is a new option: – Automatically crop still images

added to the timeline. With this option checked, all new images added to the timeline will automatically have Match Output Aspect; applied eliminating the need to use scripts or other tricks to adjust all newly added images. 32-bit floating point processing has also been improved. There are now two floating point modes: Video Levels and full range. Full Range still allows changing the gamma mode between 1.000 and 2.222. Video Levels is designed to facilitate working in 8-bit mode and then doing a final switch to 32-bit mode eliminating a lot of confusion concerning the use of

Another interesting Render As feature is now available. Vegas now looks at the project properties and determines which presets will best match those settings. Those options now have an “=” beside their names making it easier to identify renders that match the project settings.

With the purchase of VelvetMatter, many new effects are now included. These new effects include Glint, Rays, Defocus, Starburst, Soft Contrast, and Fill Light. A new transition, Gradient Wipe, allows you to create many unique wipes simply by created grayscale images.

All of these options were previously only available via 3rd party add-ons and are a welcome addition to Vegas. Many interesting new workflow options are also new in Vegas Pro 9. For example, if snapping is turned off, you can hold down the shift key while dragging an event to turn on snapping. Similarly, with snapping turned on, hold down the shift key while dragging the event and it will no longer snap.

When adjusting envelopes, you frequently need to add four points – two at the beginning of the adjustment and two at the end. Scripts have been around for years to simplify this task. For example, you could 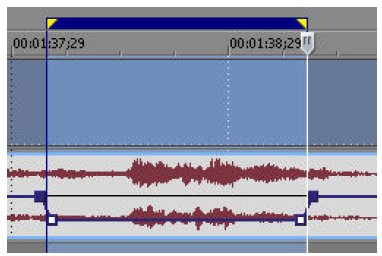 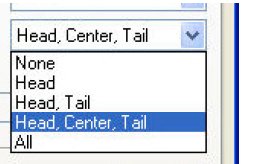 Looking back at the first image, you’ll notice the video event on the timeline only has three picons. This is the new default – only the first (Head), Middle, and last (Tail) frame will be shown on the event. Many options are available including, none, first only (Head), first and last only (Head, Tail), and All – which is what all previous versions of Vegas has used.

then manually changing the length field. A new feature will let you do all of that at the touch of a button. Just resize the generated media as desired, click the Match Event Length button, and the “Length” indicator will now match the actual length of the event. The default keyframe and fade types can now all be adjusted in the Options – Preferences – External Control & Automation tab. 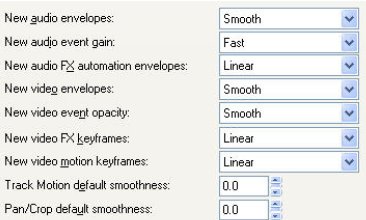 could all be adjusted quickly only via scripts. Now you can set how each of these keyframe and fade types should be set by default eliminating the need to manually adjust each one. A couple new shortcut keys are now available. When holding down ALT+Shift and dragging an event, it will now Slip-Trim the event while adjusting the right edge maintaining the last frame. When you hold down CTRL+ALT+Shift and click on an event, it will split the event. If you then drag right, it will trim the front of the event on the right. If you instead drag left, it will trim then end of the event to the left. When slipping an event that has multiple takes, you can now slip all takes instead of only the active take. To activate this new feature, turn on Options – Slip All Takes.

Audio adjustments are now more precise as well. When adjusting an audio only event, you will no longer be restricted to frame boundaries. Even with Quantize to Frames turned on, the audio can be adjusted in subframe increments. If you wish to keep the audio quantized as well, go to Options – Preferences – Editing tab and turn off Do not quantize to frames for audio- only edits. The drawing of audio waveforms has also improved. Vegas now uses 16-bit peak files to provide higher resolution. A new Use all Streams and Channels command in the trimmer window will let you choose how the various streams and channels of the media are added to the timeline. When a clip is in the trimmer, right-click the clip to see many new options available. 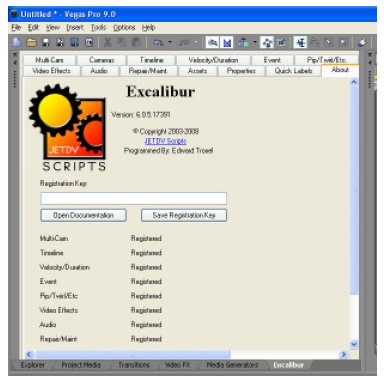 Vegas Pro 9 comes with many welcome new features, higher resolution, more effects, wider format support, and better stability – especially with the 64-bit version. Check out the new version by downloading the demo at: