Some modestly priced units, including the Packet8 VideoPhone,

plug into an electrical outlet and use the Internet. 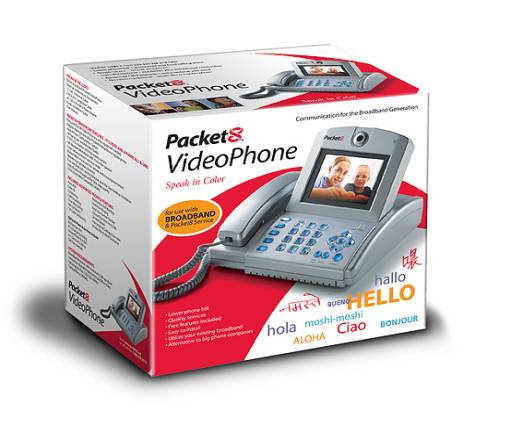 Less than 10 years ago, videoconferencing capabilities could cost upwards of $40,000. Not only were they expensive, but they were cumbersome as well and required a skilled operator. Now you can find plug and play videophone devices for as little as $270, after rebates. Videoconferencing has stepped into the new millennium and is within reach of everyday consumers.

And videoconferencing isn’t exactly what it used to be, either. These days you don’t have to be an executive in a business meeting to find use in videoconferencing. Instant messaging systems have been adding video resources, and even web logs, or blogs, are using video as well. Videophones can now allow soldiers in Iraq to talk face-to-face with their families back home.”

Simple videophone systems can be used through your PC. The Polycom PVX system requires only a PC, web cam, and the PVX software to get started. Windows 2000 SP4 or Windows XP SP1 are required to run the software, as well as a media player. This system can be purchased for just over $100. Polycom has recently teamed up with networking manufacturer Avaya to sell their ViaVideoII videophone for PCs along with Avaya’s Softphone This joint venture will allow users to place videophone calls via a PC window for the low price of $429.Check out the Polycom website for more information.

For those interested in checking out videoconferencing first, Paltalk.com is a website that offers basic videoconferencing services for free. Members can chat with up to 6 others at a time with still photos. Upgrading the membership can provide users with two-way videoconferencing for about $40 per month. The software is free and downloadable directly from the website. Over 3 million members frequent this site and many use it as a way to make new friends or find dates.

The Packet8 by 8×8 is a plug and play videophone device which lets you “speak in color” with a 5 inch LCD. They don’t offer 30 frames a second yet, but that will change in the near future. For a flat rate every month, users subscribe to the Packet 8 service, which runs through a broadband internet connection via a router. No other hardware is needed as this standalone device operates with its own equipment. You can purchase the phone for $465 with a $200 mail in rebate. Consider that service for the phone is an additional $30 per month. See the web site for more information on The Packet8 phone.

Vonage, an internet phone service provider, and Viseon, a broadband video equipment maker, have teamed up to create a videophone similar to the Packet8. This will debut in the first quarter of 2005. The Vonage web site, contains additional information on the introduction of this product.

Satellite videophones have made quite a buzz recently, most notably since the war in Iraq. These light-weight, compact devices make broadcasts feasible from just about any corner of the Earth. Weighing in at around 20 pounds, these videophones are the size of a laptop computer and can be operated by only one reporter. They allow for quicker transmissions by eliminating the need for news crews to drive to satellite uplink facilities. Though the transmissions are of a somewhat poor quality, the faster transmissions outweigh this drawback. The Talking Head model by the British company 7E Communications runs around the $10,000 mark. 7e Company web site mfg of The Talking Head satellite phone.

It’s not surprising that these devices are coming down in price. Most technology becomes less expensive as it is replaced by even newer technology. Whether you are looking to beat the competition by reporting faster and easier with a satellite phone, or just looking to have a little video interaction with your cousin in Arkansas, videophones are finally within your reach.