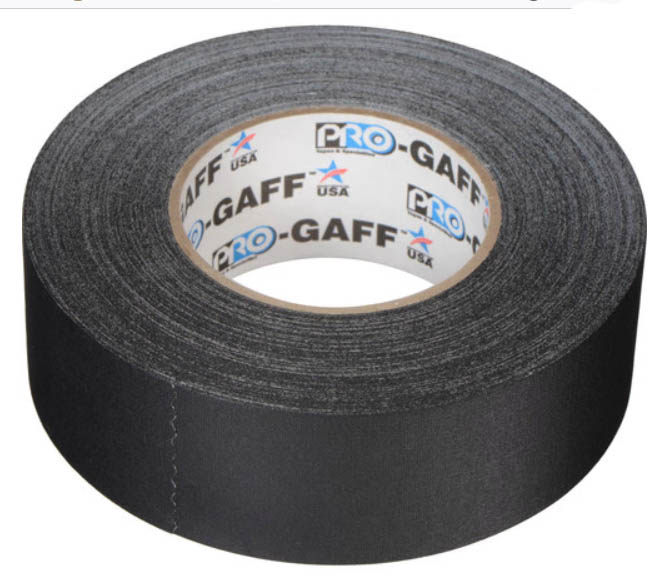 It’s still the same old story. A fight for love and glory. A case of do or die. Those lines are from the song “As Time Goes By (A Kiss Is Just A Kiss).” DISSOLVE TO THE SCENE IN THE MOVIE CASABLANCA. The battle between gaffers tape and duct tape is nearly as old. A gaffer, as you probably know, is the head electrician on a film or video set. Gaffers first used the tape to tape audio and other cables to the floor to conceal them and so people would not trip. As this tape became popular with gaffers, the name stuck. It is also widely used in theater, photography, film, radio and industrial staging work.

What we call gaffers tape is made of a durable cotton cloth with a superior adhesive to duct tape. It is easier to remove, leaves less residue and is more heat resistant than duct tape. Gaffers tape also tears easily which makes it faster to use. Beyond taping cables to the floor, the tape has found many other uses. I have used it to tape the latches on camera and equipment cases so they wouldn’t open accidentally during travel. If you were careful, you could use this tape on a wall and not damage it during removal. Gaffers tape is generally black with a matte finish to avoid reflecting light, but it is also available in many colors.

Gaffers tape is more expensive than duct tape. One should never use duct tape on a film set if you want to be taken seriously. I have both gaffers and duct tape in my home. I tend to use gaffers much more because it is better.

Gaffer tape was invented in 1959 by Ross Lowell, director, cinematographer, and founder of Lowel-Light which makes the Tota Light used in umbrella lighting and many other lighting products.