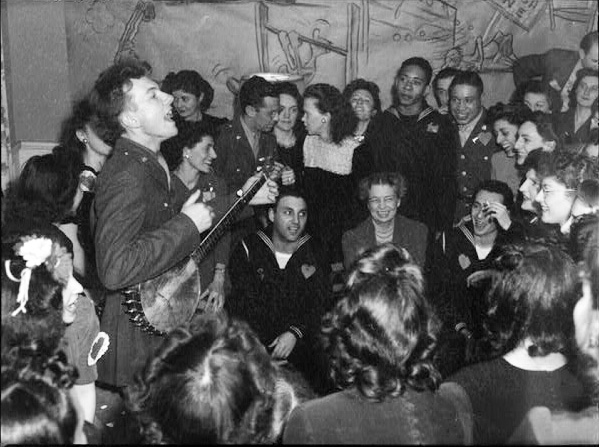 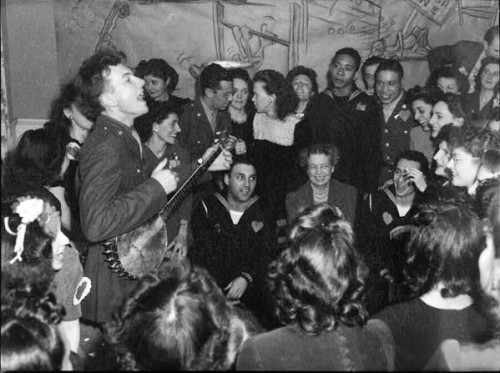 Pete Seeger entertaining Eleanor Roosevelt (center) in 1944 when Pete was in the Army during World War II.

I first met Pete Seeger aboard the Clearwater, a 106-foot gaff-rigged sailing vessel designed after 18th century Dutch sailing sloops. It was the flagship of the environmental group which Pete and his wife Toshi founded to educate children about the Hudson and its ecology and protect the Hudson River through advocacy and public education.

I was there working as an assistant cameraman for a network TV show. It was some decades ago so I don’t recall which show it was for. In fact we did essentially the same piece about the Hudson River & Pete for several different shows over the years.

When I moved to the Hudson Valley from New York City, I discovered the Beacon Sloop Club on the shores of Beacon, NY. The clubhouse building had a tree growing through its roof. It had been framed to allow the tree to continue growing. A large stone fireplace was the only source of heat. The point of the club was to help clean up the Hudson river which at that time was just about dead as an ecosystem. The few fish that remained could not be eaten from years of pollution from GE factories upstream.

Years later I discovered a 1965 National Geographic with Pete Seeger on the cover in front of the Beacon Sloop Club which he also founded. He’d built a log cabin on a hill over looking the Hudson. He and Toshi heated the house with wood. Pete cut his own wood and was very well known around town.

I remember sitting next to him at a Beacon Sloop Club meeting. There was a passionate discussion about which environmental issues the club should promote and how. He turned to me and said “isn’t democracy wonderful.” He wasn’t being ironic. He meant it and lived it.

The Beacon Sloop Club had monthly meetings with potluck dinners, music by Pete and others. There were music festivals and work parties to rid the river shores of trash. We also had docks and a mooring field where I kept my boat. If you had a mooring, you had to work so many hours in the spring and in the fall pulling the moorings and docks out of the water and then replacing them in the spring.

Even when no one was around the clubhouse, you’d often see Pete down there picking up trash or taking care of the area. At this point he was in his eighties. He was full of energy. Instead of seeing him walk to meet someone, he’d always jog. Pete was one of the most approachable people I’ve ever known.

He was one of the earliest backers of Bob Dylan and was instrumental in pushing to have Dylan’s first LP produced on the Columbia label. Seeger later invited Dylan to perform at the Newport Folk Festival, of which Seeger was a board member.

Pete wrote these songs:
If I Had a Hammer
Turn! Turn! Turn!
Where Have All the Flowers Gone?

In 1950 he founded The Weavers, a folk singing group. Together they popularized the Leadbelly song “Good Night Irene.” I always thought that Pete wrote “We Shall Overcome.” He didn’t, but he certainly popularized it as the anthem of the 1960s Civil Rights Movement. It’s been called the most important song of the twentieth century.

Another musical tidbit I did not know was his connection to the song “The Lion Sleeps Tonight,” which was a 1961 number one hit for Tokens. Seeger and the Weavers had brought this South African song to the U.S.

The last time I saw Pete Seeger, he was singing and playing at one of the monthly Beacon Sloop Club Meetings. His presence left a big mark on the world. Thank you, Pete!