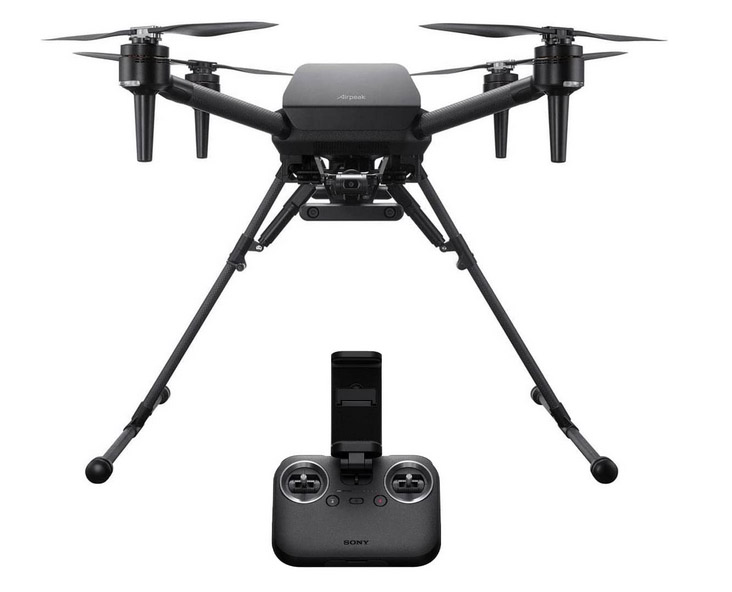 Gimbal and camera not shown.

Sony’s $9000 drone has retractable landing gear to avoid getting its legs in the shot. The Airspeak is plug and play for any Sony camera. The remote control can adjust any of the camera settings like exposure and shutter while you fly. Sony designed this quadcopter from the ground up, including the props which can be surprisingly hard to design and build. The gimbal is the only thing they subcontracted from another company. Not included in the price, the gimbal costs an extra $2000. The controller is also a Sony design with the exception of the iPad. It gives you the video of what you are shooting and all of the telemetry like camera battery, distance, altitude, speed.

It’s very stable. Some of the shots look like they were made on a tripod. The biggest downside is battery life of 10 – 14 minutes. More if you use a very light camera and lens. Since Sony has obviously invested heavily in thier entrance into the drone industry, I’d be surprised if that didn’t improve the battery life in the near future. Watch out DJI!

The FAA requires a Remote Pilot Certificate for commercial flying if your drone weighs less than 55 pounds. The Sony Airspeak weighs 23.2 Pounds.Available on the Sony Store on Amazon. See the first look and demo on YouTube.