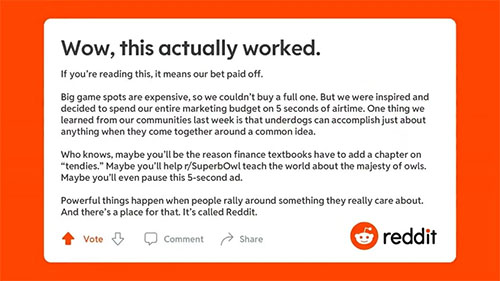 Reddit, the message board, says they couldn’t afford a super bowl ad so they bought five seconds. Other companies spent millions on ambitious TV commercials made for advertising’s biggest day of the year. Reddit’s tiny ad was made in less than a week and connected with viewers. See the ad on Twitter.

The Kellogg School Super Bowl Advertising Review, an annual ranking from Northwestern University’s business school, reported shortly after the game on Sunday that Reddit’s commercial was among the most effective commercials of the Super Bowl. The Reddit ad starts out like a clichéd car commercial, with two S.U.V.s racing across the desert. Then the video seems to fry, and Reddit’s orange-and-white alien-head logo commandeered the screen, followed by a lengthy printed statement that was not on the screem long enough to read, Viewers scrambled to grab a photo or screenshot. The statement begins “Wow, this actually worked,” read the message’s headline, a reference to Reddit’s appearance in its first Super Bowl commercial.”

This five-second commercial was among the most-searched Super Bowl commercials on Google on Sunday night. It received more than 270,000 upvotes after being posted on Reddit.