What’s the Difference between Documentary and Feature Film 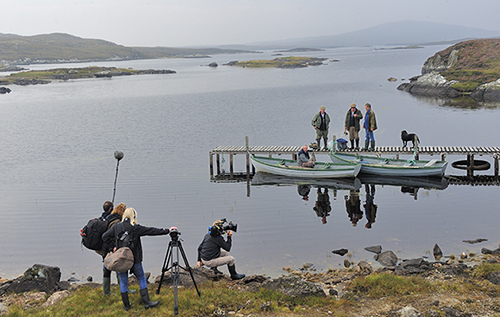 A BBC production courtesy of http://www.countrylife.co.uk/

Feature films and documentaries are part of the living history of filmmaking; they grow, mature and change with time. The difference between documentary and feature film can be giant or small.

Both bring forth unique visions of our world, our cultures, our lives and loves. There’s more than one difference between documentary and feature film. They each have distinct differences in style, content and audience, even as the lines between them often blur.

In general, the main reason feature films get made is to entertain the audience; to give people an escape. Documentaries are meant to inform; to confront people with reality: and sometimes to promote a point of view.

Documentary makers certainly want to engage and captivate their audience, and some feature films can be very informative, but a key difference between the documentary and feature film is in the filmmaker’s motivation.

Feature films are mostly fiction, sometimes total fantasy. Some may be based on real events or people, but the director and screenwriter will be adding drama and impact with their creative license. Genres include comedy and musical, action and western, romance, crime, horror and science fiction, among others.

Documentaries are non-fiction films. Directors and writers help structure the film, rather than creating characters or taking liberties with the facts of the story. Documentaries can take on social, political and economic issues, or profile a person, place or thing.

Feature films take care in introducing complex characters and spinning an intricate storyline over a running time up to three hours. There’s an ebb and flow to the action, with carefully timed and structured mini-climaxes and dramatic highlights. The scripted story, characters and actions all are pointed in the same direction, leading the viewer through events with a sense of beginning, middle, dramatic climax and end.

In documentaries, often the action leads the way. People don’t have scripted words to say or scenes to enact; handheld cameras might be the only way to follow the story. Even the director doesn’t always know what happens next. Documentary makers often say that discovery and surprise is a big part of their job.

Documentaries are usually less expensive to make than feature films, with less elaborate production frills. Documentaries can cost only a few thousand dollars, with small crews, single camera set-ups and few if any paid talent. The result is often raw, unpolished but effective nevertheless.

Feature films can cost millions, even hundreds of millions of dollars, thanks to top stars with top salaries, directors and scriptwriters, music scores, exotic locations and costumes. A top feature film often has its “money on the screen” with lush cinematography, gorgeous actors and actresses, big bang special effects with large and talented production teams in the background.

Of course, big-name actors sometimes do participate in documentary-making, often with a reduced fee and a strong belief in the project. And some low budget or “indie” feature films turn out to be huge successes.

In fact, documentaries have become big box office, with serious Academy Award weight sitting with them. Often very entertaining, they can be as controversial nowadays as the subjects they cover.

And some feature films today are taking on very serious topics, with some post-911 war-themed movies seeming more real than the stories they relate. The difference between documentary and feature film can be obvious or subtle.