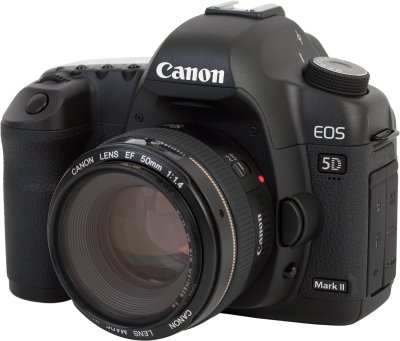 The camera has achieved some fame. The 5D Mark II was the first digital camera used for an official U.S. Presidential still photo portrait, taken by Pete Souza in 2008. In video it has a number of famous credits:

The opening title sequence for the 35th season of NBC’s Saturday Night Live in 2009 was filmed with a MarkII and a Canon 7D. These small cameras allowed discrete shooting on the streets of New York City. The depth of field capabilities compared favorably with the series’ normal 35mm film.

The House episode “Help Me”, on Fox TV was shot entirely on the Canon 5D Mark II, replacing the shows’s usual 35mm film format. The entire seventh season of the show was also recorded with a 5D Mark II.

The BBC Two has filmed Shelfstackers, a comedy series with the camera.

Obama’s War, A documentary for PBS was shot on a Canon 5d mark II. Photojournalist Danfung Dennis: How I cover the Afghanistan war with the 5DmkII.

The two feature films each claim to be the first shot with this camera: 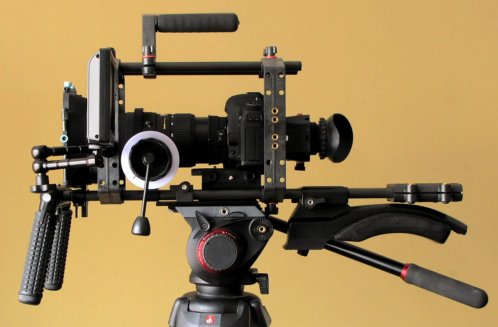 While the camera can record full HD at 1920×1080, I think there are better and easier ways to shoot a feature film.

Firmware upgrades have added significant improvements. Current versions of the camera have manual control over aperture, shutter speed and ISO while recording video. Current versions also support 1080p at NTSC 29.97fps, 1080p at PAL 25.00fps and 1080p at cinematography 23.976fps. It also added a function for manually adjusting the sound recording level at 64 levels, a histogram display to evaluate brightness or RGB for shooting video with manual exposure.

The EOS 5D Mark II can do autofocus while recording video if you are in Live Mode or if Face Detect is selected. The problem is that you have to continually press the AF-ON button and then wait for up to several seconds. Unlike the autofocus on most camcorders, this kind of autofocus is not very helpful.

The Canon 5D Mark II is a revolutionary full frame DSLR camera. You can achieve that film quality look (shallow depth of field) in a relatively compact and inexpensive package. This is the reason why many producers, directors and cinematographers are now using it to shoot TV shows, commercials and feature films.

The new LCD screen is beautiful. 3″ diagonal with 900,000+ pixels. The menus are easier to understand and navigate than most any other DSLR. The “Live View” feature is an excellent way to do critical focusing and the 21 megapixel resolution is amazing.

It really is the best bang for your buck ($2699) when it comes to visual quality, durability and portability in a camera (Remember that a solid array of lenses will run around twice the price of the body). However, the 5D does have some minor drawbacks. First of all, recording internal audio poses a problem. The internal microphone picks up levels on focus pulls and until recently you weren’t able to disable AGC (Auto Gain Control) without cracked firmware. I recommend purchasing a ZOOM 4Hn recorder to bypass the 5D audio issues. Record your audio with this device and synch it to video shot on the 5D in post.

The second drawback is that you can only capture 12 minutes of video at a time. Any longer of a clip and the 5D is no longer considered a DSLR camera. If you plan to use the 5D alone on shoots that require seamless video throughout, I wouldn’t recommend this camera. After 12 minutes of footage is up, you will have to hit record again and you will lose a couple seconds in between clips. You can get around this by shooting with two DSLR’s and delaying record start times between the two. In post, switch to the alternate camera when you are in between clips.

Finally, the battery life only lasts for about an hour. Extra batteries are expensive (LP E6 – $70) but essential for this camera. Shooting constant handheld video over a battery charge will drain it quickly, as well as overheat the camera. Give the camera a break if you notice overheating. Also, consider purchasing a Battery Grip (Vello BG-C2 – $70) for more balance, battery life and improved ease of use. This grip makes the camera taller and easier to hold. It also allows simultaneous use of 2 Canon lithium batteries or 6- AA alkaline.

All in all, the only thing better than using this camera for film production is using two of them. I highly recommend this camera for anyone looking to produce professional quality video at a low price.