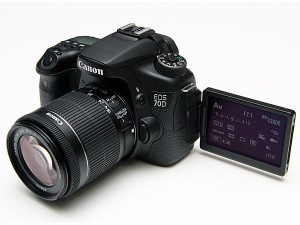 In my wedding video business, my primary cameras have been the Canon 5D Mark III and the Canon 6D. I have used the Canon 60D just for close up shots during wedding ceremonies. I also use a Panasonic HMC-150 as my full time wide shot. Because they are full frame, the Mark III and the 6D don’t get close enough to the altar in long churches even with the 70-200 and frankly neither does the 60D. The 60D at 2500 ISO is disappointing in image quality and noise.

The new Canon EOS 70D Digital SLR Camerais great for close ups because with the 3X crop built-in, my 70-200 becomes an incredible 210-600mm 2.8 IS. The sensor crop gives an additional 1.6. It’s not the same as a zoom, but it functions in a similar way. The fantastic touch screen interface makes the menu easy to manage.

I can push the 70D’s ISO to 4000 and record clean video (see the clip below). For me that means that this is now useful for Glidecam at receptions, and overhead shots with the flip out LCD. These shots are tough to do with the Mark III because you have to guess at your framing since you can’t see the LCD.

With this DSLR I may be looking at the end of video cameras. If I set the 70D on a medium shot of the altar where the groom will be, and hit record, I have almost 30 minutes of record time, 29:59 to be exact. In 90% of the cases, that is long enough for the processional. So now I can eliminate my HMC-150 and have four matching shots from Canon DSLRs.

From a usability standpoint, the 70D is almost exactly like the 60D. Same basic size and feel. The 70D does have a dedicated switch for video/photo so when switching modes you don’t have to reset your settings between photo and video. There a few other basic changes like having the menu button on the left, but Canon does this type of thing every time they update a camera. The biggest change in usability from the 60D to the 70D is the remarkable touch screen. I honestly forgot about the touch screen until the reception when I was trying it out with the digital zoom. Rather than fiddling with the Q button and the clumsy joystick pad thing, you just touch the Q on the screen and touch whichever function you want. It was amazing. Not to mention the touch focus, which brings me to the most surprising thing.

The Canon 70D really and truly has FULL TIME FUNCTIONING AUTOFOCUS! I’ve been manually focusing for 3 years with the 5D. When autofocus was first announced, I thought it was nice, but that I wouldn’t use it because it probably wouldn’t work. Honestly, this is the best auto focus I have ever used. Through all the Sony, Panasonic, and Canon video cameras I’ve owned, I have never used a more fluid and accurate auto focus.

When I want to focus on a something, I just touch it on the screen and it locks focus on that thing. No matter what’s behind it or moving in the shot or brighter. It really works. I can see the auto being so helpful in times where I can’t be behind the camera. But, it could also be useful for Glidecam or crane shots where I can’t touch it or manually focus. The autofocus does not, however, work in digital zoom mode.

As a family camera, the 70D is ideally suited for kid’s functions because of the digital zoom. No more lugging the 70-200 to preschool plays. The camera with the good old 17-55 2.8 is light and manageable and so versatile. I can take photos, switch right over to video mode and use that awesome autofocus to chase the kids around. It is ideally suited for family vacations. I love the Wi-Fi function for posting decent shots to Facebook even from the beach or a theme park. I did this a lot with the 6D. The 70D’s Wi-Fi seems to work better than the 6D’s.

People have been asking me how it compares to the Canon 5D Mark III. The Mark III is still the low light king and I will not be giving it up anytime soon. The Mark III’s ability to monitor and control audio makes the Mark III better suited to doing interviews or anytime you need usable ambient audio. Keeping in mind that full frame is not better than crop or vice versa, I think it’s good to have both in your bag so that you have the tools you need to get the best shot. I can’t comment on moiré and aliasing other than to say it probably still has the same issues as the 60D. The 5D does not have those issues. Would I buy four 70Ds as my whole arsenal? Probably not, but I would be comfortable shooting all day with just the Canon 70D.