A Guide to HDV

As you probably know, High Definition video is not just a little better than Standard Definition, it’s a LOT better. Since a frame of HD video is so much larger than a frame of SD video, it requires a lot more processing muscle and storage. Producing HD is a lot more expensive than producing standard definition video. That’s where a brilliant solution called HDV comes into play. The term HDV is a combination of “HD” and the very popular “DV” format we’ve all been using for about ten years now. HDV is a very clever way of getting HD on DV tape. It’s done by using MPEG2 compression which is the same compression used for DVDs. MPEG2 is a much more complex codec than DV and this adds to the computer requirements.

The DV format already compresses standard video by a factor of five to one. HD requires 5 times as much storage as SD. And the editing of HDV footage requires more computer processing power than most computers need for editing SD DV footage.

All of the major players are devising HDV editing solutions such as using the Cineform codec in Sony Vegas with a very powerful computer. Most computers that are fine for editing DV are not strong enough to edit HDV. However, if you are willing to put up with slow rendering, some solutions, such as Apple’s iMovie HD, can edit HDV on a modest 1 gigaHertz CPU.”

Until the world catches up and makes Hi Def the prevailing format, HDV may not be the right format for all video projects. For some it can be a smart move to have the program or footage recorded in HD for future release in an HD format. The HDV can also be downconverted to Standard Definition so that the hundreds of thousands of SD TV sets and DVD players can view it today. Downconverting the HDV footage can give you the best of all possible worlds: As Douglas Spotted Eagle says in his book HDV-What You Need to Know; “If you shoot in HDV today and use that video to create SD DVDs, you still have the option to redistribute your projects in HD format in the future. Wouldn’t it be nice to go back to your clients and ask them if they would like an HD version of their project, or re-master your own home footage in a high definition format?”

As we see widespread adoption of HD broadcasting and HDTVs, many expect that the HDV standard will become the norm for a lot of video production. However, DV and its’related formats is currently the mainstream as far as price and the popularity of cameras, decks and editing systems are concerned. Nevertheless, there will soon be more models of HDV camcorders on the market, and when the prices come down, HDV will likely replace DV as the main standard. But don’t run out and mortgage your house to get an HDV solution. Make a smart business decision for your video business niche. This transition to HD has different business implications for different businesses. For instance independent film producers will undoubtedly see business advantages for adopting HDV long before most wedding videographers. And TV producers will have a different timetable than corporate video producers.

Surprisingly, the Discovery Channel which has a major committment to producing Hi Def, accepts all professional HD formats, but as stated in an article at tvtechnology.com “One HD format that was unacceptable for HD production for Discovery was the new semi-pro 19 Mbps system used by the JVC JY-HD10U,” which is HDV.” The HD formats that are acceptable to Discovery include D-5, HDCAM, HDCAM SR and DVCPRO HD. 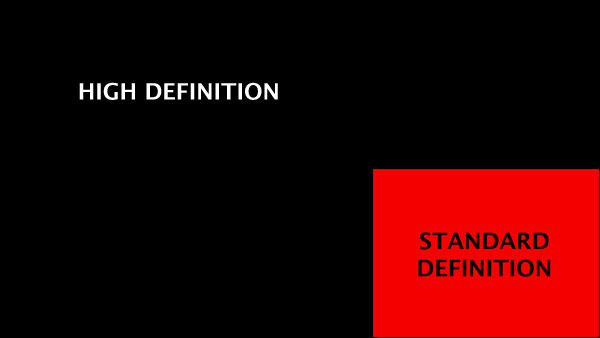 As with any business decision, study your area of the video industry carefully before making any assumptions.

Some of the best HDV links:

Excellent Q and A about HDV