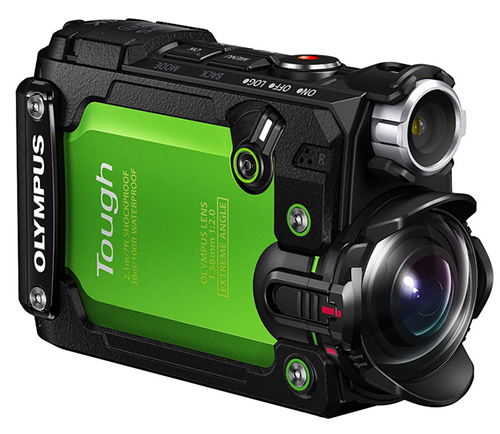 The Olympus Stylus Tough TG-Tracker captures 4K at 30 fps. It is waterproof to depths of 100 feet (30 meters) with no additional housing. It’s shockproof from 7 feet, freezeproof to 14 degrees F and crushproof up to 220 pounds of force. So far it’s just about better than GoPro.

240fps, 120fps high-speed video at 720p resolution
8-megapixel stills so it may not replace a still camera
204-degree angle of view f2.0 lens
Built-in LED light that doubles as a flashlight and this is a first in my book
Time-lapse and loop movie recording modes
Five-axis electronic image stabilization
Flat-lens cover included for underwater shooting
Built-in Wi-Fi for mobile transfers and remote control
Supports microSD cards up to 128GB

It has a Field Sensor System with GPS, temperature, barometric pressure and accelerometer sensors. The camera can capture position, speed, water and air temps, altitude and water depth. These can be viewed on the camera’s flip-out display or on its companion smartphone app. The camera will even keep collecting data when it is not recording. The sensors alone make this camera better than GoPro. 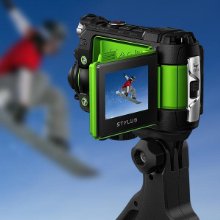 The TG-Tracker comes with a three-prong mount adapter that’s compatible with widely-available action cam mounting accessories. In addition, the included Steady Grip allows for comfortable shooting from any angle.

It does not have a mic input, although it does have a left and right mic built into the side of the camera

This camera is what I should have chosen for my Underwater ROV. Oh, and I forgot to tell you the price is $349! For more information see
the listing on Amazon.

Better than than GoPro?