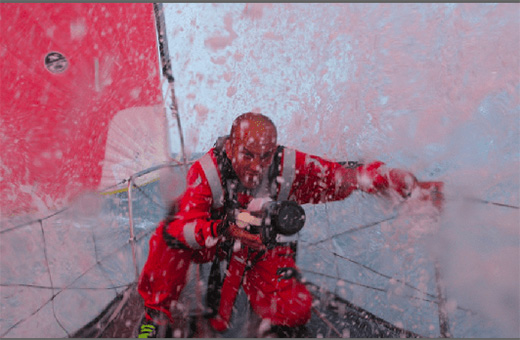 The Volvo Ocean Race is a round the world ocean race that takes about 9 months to complete. It is held every three years. The race is sponsored and owned by Volvo, the Swedish automobile manufacturer. The race typically leaves from Europe in October, and in recent history has had either 9 or 10 legs, with in-port races at many of the stopover cities. The 2008–09 route covered nearly 39,000 nautical miles, and reached a cumulative TV audience of 2 billion people worldwide.

The 2017–18 Volvo Ocean Race is the 13th edition of the round-the-world Volvo Ocean Race. It started in Alicante, Spain, and will conclude in The Hague, Netherlands. As I write this, the boats have all arrived in Newport, RI from Brazil to complete leg 8.

No fresh food is taken on board, so the crew lives off freeze-dried fare. Temperature will vary over the course of the race from 23 to 104 degrees Fahrenheit. Each crew member brings just one change of clothes.

Since the boat runs 24 hours a day, it uses a watch system of 4-hours on, 4-hours off. The crew size ranges from 7 and 11 crew members depending on the gender ratio. Every boat in the Volvo Ocean Race has one Onboard Reporter who is dedicated to capturing the stories of the race and the crew. The reporter is not allowed to do anything at all sailing related. This multimedia reporter is armed with state-of-the-art technology and years of experience in video and still media business. The job is to give the fans on shore around the world documentary samples of this extreme sport.

It takes a certain kind of person to face the mental and physical pressures aboard a sailing vessel running non-stop through extreme weather and to send video, photos and text back to Volvo Race Headquarters where the race can be shared with the world. It also takes a strong stomach. Much of their work is below deck where there are no portholes and no visible horizon. You can expect some violent movements as the boats plow through giant waves at speed.

Only a few people are chosen to do this work. In fact more people have been to the moon than have been Onboard Reporters in the Volvo Ocean Race. The work of the Volvo Ocean Race Onboard Reporters is regularly featured in publications like the The Daily Telegraph (British), the New York Times and on more than 240 video broadcasts around the world.

The onboard reporters are male and female and have backgrounds in adventure sports videography, National Geographic, kitesurfing video, sail racing, drone pilot, sailing and documentary work, former soldier and more. 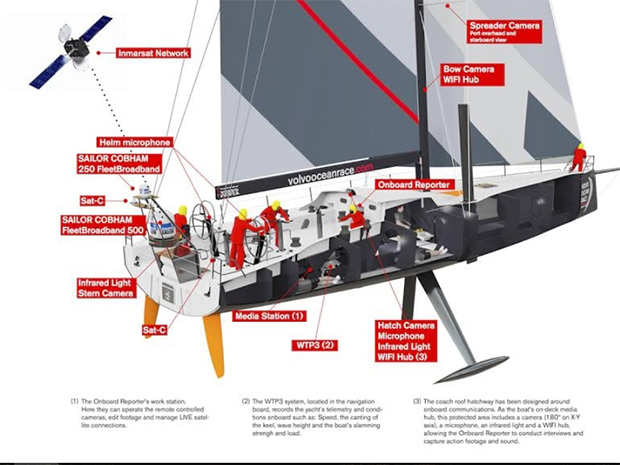 There are five fixed HD cameras on the mast and in the cockpit as well as two onboard microphones so moment is captured. The crash cam on the stern records the action on deck 24/7. It keeps four minutes before and after any incident so nothing is missed. In addition the Onboard Reporters have cameras for slow-mo, night vision, POV and wide lens cameras as well as drones and a 360-degree camera. The first to successfully fly a drone from a moving Volvo Ocean 65 was in 2014. From the videos I’ve seen, it’s hard to imagine how they could launch a drone in some of the sailing conditions.

The onboard media station below deck includes a video editing suite, a camera and a mic controller. Each piece of hardware can also be operated remotely from Race HQ.

All of this gear is powered by a Volvo Penta D2-75, an air-cooled diesel engine from the sponsor. The engine produces the electricity for all the communications equipment, computers, lights and heating throughout the entire race and in emergency situations. But the engine is only permitted to provide propulsion for the boat to motor in and out of the Host City marinas. The race itself is strictly sail.

The boats are all the same – a Volvo Ocean 65, which is a class of monohull racing yachts. This is called a one-design event, and because the boats are all identical this reduces the cost of mounting a campaign. It takes 7 months and 36,000 man-hours to build, assemble, and paint a Volvo Ocean 65. There are only 8 Volvo Ocean 65’s. Estimates are that each boat costs about 1.2 million dollars.