Steadicam Shots You Should Know 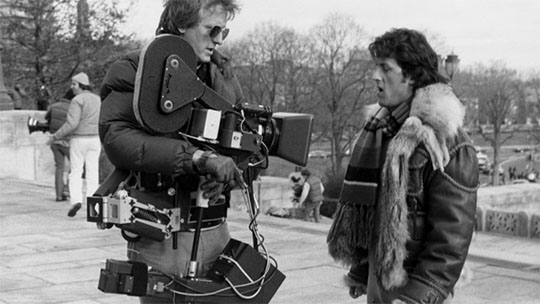 The Steadicam® is now 40 years old. The Steadicam was invented and developed by Garret Brown who won 5 Academy Awards for it. Let’s look at some of the high points of its contribution to the film and video language.

The first use of a Steadicam was in the film Bound For Glory about the life of Woodie Guthrie. The amazing thing about the shot is that it begins as a crane shot, but when the crane reaches ground level, the shot continues as a walking shot. This was only possible when the camera operator was sitting on the crane holding the camera and then stepped off the crane with the camera still running and followed the subject walking through a crowd. A handheld shot would never have worked, but the Steadicam provides the fluid movement that’s needed. The typical audience may not realize how remarkable that one continuous shot is.

The story of Rocky running up the steps at the Philadelphia Museum of Art is another landmark in cinematography. Some of the other milestone Steadicam shots include Goodfellas, and The Shining.

Lesser known in America is the film The Russian Ark (1992) which is one single Steadicam shot for 96 minutes – the entire length of the film! This was shot in video because no film magazine could run that long. It runs without stopping through 33 rooms in the Winter Palace of the Russian State Hermitage Museum. There is a cast of over 2,000 actors and three orchestras. According to In One Breath (YouTube), the documentary about the making of the film, four takes were made before they got the successful shot. This all happened in one day. Roger Ebert said “Russian Ark spins a daydream made of centuries”

In the following video essay by Ben Kenigsberg and Mekado Murphy of the New York Times, we see those five films which are milestones in the history of cinema.

It is not so much the device but the operator that makes a Steadicam shot work. These shots have contributed to the language of film in “single-shot” films like Birdman and Robert Altman’s The Player. A moving story which is the essence of filmmaking does not, however, require a moving camera. But it doesn’t hurt.

Steadicam was just the beginning. Today there are hundreds if not thousands of devices both manufactured and home-made camera stabilizing systems. Amazon alone list some 23,000 camera stabilizers. Many of today’s films are full of Steadicam shots. Commercials, wedding videos, and corporate videos also use this visual storytelling tool. Thank you Garret Brown.