Pro bono is Latin for for the public good. This includes professional work undertaken voluntarily and without payment or at a reduced fee as a public service. The pro bono video project is often performed to gain experience and build a demo reel, to transition into new areas of video production, to network, and, most importantly, to do something good for others.

According to IRS Publication 526 “you cannot deduct the value of your time or services … and the value of income lost while you work as an unpaid volunteer for a qualified organization.” You could, however, deduct out-of-pocket expenses you provided to produce the video. The IRS publishes the following criteria for deducting pro bono service expenses:

Typically, you cannot deduct the cost of equipment purchases unless you gave the equipment to the non-profit. Check with the IRS and your accountant for more details. 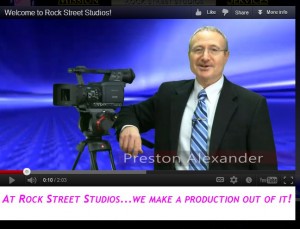 Preston Alexander is a video studio owner in Fall River, MA. His company, Rock Street Studios, is devoted to business videos and has been in business for three years.

As Preston says “It was always my philosophy to give so I decided to do some pro bono video for non-profit agencies.” One of his clients introduced him to the Schwartz Center For Children, a non-profit which serves children with developmental & medical special needs. He volunteered to produce a video for them as a fundraiser. That video was shown at a special event where it became the centerpiece shown on four very large screens in a giant tent by the water. At the end of the video, there wasn’t a dry eye in the crowd. It received a standing ovation. That video succeeded in raising more money for the agency than anything had in the past. Preston spent two months on the project while doing other work.

Preston says “I’ve been getting new paying clients from this pro bono work. So casting your bread upon the water does return.” But he is quick to point out that you can’t do pro bono work strictly as a marketing tool. It has to be a genuine gift. As he says “Do it from the heart and everything that follows will be a gift for you.”

So far he’s gotten two more projects from this work and he hadn’t even mentioned that it was a pro bono video. What sometimes happens is when you work with the marketing person at an agency, this relationship leads to other projects and alliances – an unexpected benefit of doing pro bono work.

Most recently he volunteered to do a pro bono video for a local philharmonic orchestra that he felt in tune with. This ended up being, not one, but a collection of videos of local classical performances. He was beginning to wonder if he could afford to do this much free work, but concluded that he should and he would.

Fortunately, he found a number of efficiencies in doing a series of similar and related videos. These might all include some of the same elements and structures. A virtue of this work is that not only are you involved with a cause you care about, but you also have a lot of creative freedom in producing the video. Unlike commercial projects where the client has ultimate control over the project design, the pro bono client often gives the producer complete creative control.

Preston’s video company was given a full page glossy ad in their music program. He was introduced to the president of the board who passed his name along to another person who was producing an educational documentary who hired Preston for some editing. While there have already been some financial rewards, we caution producers that financial reward is not the right motivation for this work. Do a pro bono video because you want to help.