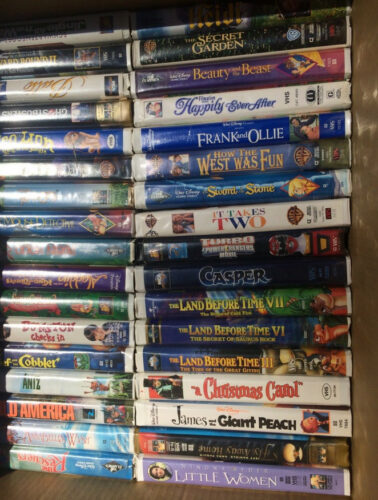 The VHS format is obsolete. Nevertheless, there are vast libraries of films and TV shows on VHS that are unavailable elsewhere. There is a big nostalgia factor even though the last VCR was manufactured in 2006. There is also a surprising market for prerecorded VHS tapes. Take a look through the VHS tapes available on eBay or Etsy. On eBay be sure to look at the Show Only/Sold Items to get a realistic picture of the prices and what actually sells. The listing of unsold items on eBay does not give you an idea of the price or marketability of a VHS tape. Some of these may never sell. While there have been some spectacular prices on VHS tapes as you can see on ScreenCrush, the vast majority are in the under $20 range. Nevertheless, it is surprising to find such a healthy market although it is not a VHS resurgence.

One factor is that some movies were released direct-to-tape, but nowhere else. Direct-to-tape means a film, TV series, short or special was released to the public immediately on home video formats rather than in a movie theater or television broadcast. Some of these Direct-to-tape videos were pretty obscure and never made it to DVD or streaming. So the VHS tape may be the only existing version of these films.

In my transfer business I have had a number of requests to transfer foreign films on VHS to a modern format. These rare films never received a wide distribution. The question arises of whether it is legal to transfer a copyrighted film. The fair use provision of the DMA allows you to make a copy, without regard to medium, as long as it is retained for personal use. When the Supreme Court decided the Sony Betamax case, they said time shifting or taping TV shows was fair use, because taping for home use was noncommercial and private. As long as you don’t distribute copies to other people, you should be fine. But you can find endless debates on this issue.

If you’ve ever tried to hunt down a DVD or streaming version of a little known film, you may find that there are no DVDs or digital versions, only a couple of VHS tapes on eBay. It is likely the film was never popular enough for the producer or distributor to convert it to DVD. Some collectors have vast libraries VHS tapes that are unavailable elsewhere. While they may believe in a VHS resurgence, it is highly unlikely.

James Chapman, a professor of film studies at the University of Leicester in Britain says VHS tapes were “the first technology that allowed mass, large-scale home media access to films.” There is a lingering mystique about VHS among some people.

But before you get carried away with the possibilities of a VHS renaissance, remember no one currently makes VCRs or VHS tapes. One company RAD VCR claims to be manufacturing a new VHS DVD Combo machine which looks identical to the Funai and Sanyo machines I own. They are not shipping for six to eight weeks so I advise you not order one until they at least have them in stock. I wrote them and here’s what they said “Our units are being made brand new by our manufacturing team. We’re using Funai’s model for our pictures, because ours are still being manufactured. Our units will look identical to the Funai unit so that’s why we used their picture. We will be updating everything on our site soon.”

His email response did not include his name so be quite wary of the offer even though I saw their ad in very reputable publications.