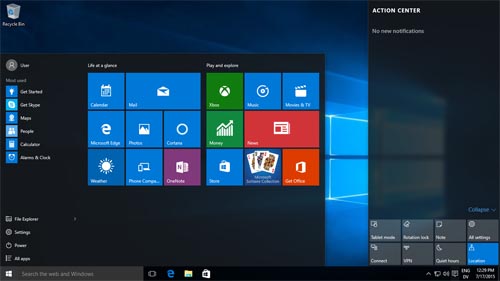 If you are running Windows 7, Windows 8  or Windows 8.1, Microsoft will begin automatically sending a free upgrade to Windows 10 via Windows Update starting January 2016. The default will be to automatically upgrade so unless you are  vigilant, you will end up with Windows 10

While the update to Windows 10 will begin automatically for some users, anyone can refuse it during the upgrade process. But be sure to read the Windows Update prompts carefully. Some users reported that they were unable to back out of the upgrade. Microsoft says even if you upgrade, you still have 30 days to restore your previous operating system.

Some early reviews of Windows 10 discovered some software incompatibilities, but now it seems that Microsoft has corrected most of those issues. So if an application ran on Windows 7 or 8,  it should also run on Windows 10.  And the new operating system has a compatibility mode that tricks applications into thinking they are running an older version of Windows.

What Won’t Run on Windows 10

Microsoft does offer an Upgrade Advisor that is built into the new “Get Windows 10” program that is available to Windows 7 and Windows 8.1 users via Windows Update. It will look at your systems and tell you if there are applications or hardware that won’t work in Windows 10. You might also want to visit the website of the hardware or software manufacturer and see what they say about Windows 10.

What’s This Gotta Do With Video Producers?

Aside the potential software and hardware issues, the only thing we can find so far is that Windows 10 can no longer play video DVDs or Blu-rays. Unlike previous versions of Windows, Windows 8 and 10 don’t include built-in support for playing DVDs. I  never liked Windows Media Player anyway or for that matter Apple’s Quick Time simply they won’t play all the video codecs and that’s a pain. I’ve been recommending a free, open-source media player called VLC. It will play DVDs and Blu-Rays, it will make video screen captures, it converts files, records webcam video and it will read any video or audio file you throw at it. There are other video players, but this one is hard to beat.

If you bought a new Windows 8 or 10 computer that comes with its own DVD or Blu-ray drive, your computer’s manufacturer probably included DVD-playing software with your computer. And it probably opens automatically when you insert a video DVD. If not, type DVD or Blu-ray at the Start screen to search your installed applications and see if you have any applications with DVD (or Blu-ray) in their name.

Microsoft dropped DVD support because these days so many new tablets and Ultrabooks do not include DVD drives. Microsoft pays a licensing fee for each copy of Windows with DVD support. The major video Windows editing systems from Premiere, Avid, Sony, Edius all support (or soon will) Windows 10. For Windows 10 and video producers, it may be too soon to tell.

While it’s probably inevitable at some point, I intend to avoid Windows 10 for as long as possible.