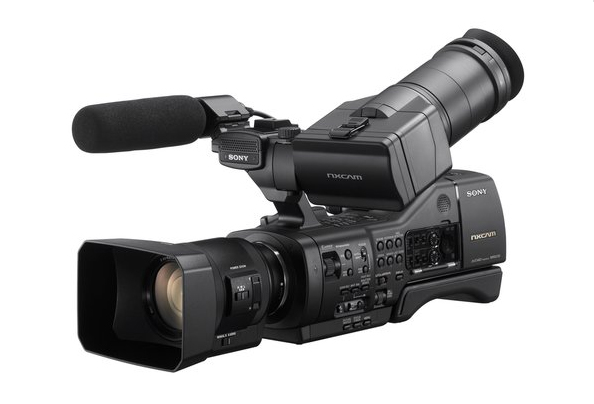 I finally pulled the trigger on the new camera Sony NEX EA 50UH. This is a preliminary review since I am still learning the camera. First, the camera has a 16 megapixel APS-C sensor very similar to Sony’s mirrorless line of still cameras, nearly as big as the Super 35mm sensor.

Also I loved the idea of interchangeable lenses like every DSLR has. There are adapters for sale for Canon, Nikon, and other lenses which convert to the Sony E mount on the camera. The catch is that not all electronic lens functions are working yet in some adapters, but manufacturers are sure to fill that gap. There are, for instance, lenses from Rokinon/Samyang that are affordable and use the Sony E mount without adapters:

And the included XLR inputs are a must in my list.

Another plus is the viewfinder tube or eye loupe much like the Sony EX3 (which costs about twice this camera). This long viewfinder tube is great for shooting outside or in a bright location where an LCD would wash out. Like DSLRs the aliasing is an issue, but according to Jerome Cloninger another EA 50 owner who also loves his Canon 60D, the moire and aliasing are not nearly as bad as any Canon DSLR in video mode. I’ve seen very little of either in my tests so far. I haven’t yet explored the 16.1 megapixel still camera that is part of this camera.

In addition the camera will produce 4:2:2 which is the color sampling format used by most professional formats. This is via the HDMI port of the camera if you use an external media recorder. This avoids the AVCHD recording which is 4:2:0 colorspace. You can simultaneously record to both a memory card in AVCHD and to the external recorder in 4:2:2. The 4:2:2 provides a very clean key for green screen shooting. The Sony HXR-FMU128 flash memory recorder can record more than 12 hours at 24Mbps and 10 hours at 28Mbps. It’s $639.00. I’ll try this as soon as budget permits, but it sounds promising.

The camera can shoot in either 50Hz or 60Hz systems so you can shoot for anyone in the world with this camera. It also has a built in GPS. At first glance, I thought who would ever want that? Then I realized the Boating Life video I am planning to shoot could make very good use of that feature to add Google map locations to the video. We’ll see.

While the kit lens is slow, I was very impressed with the how good the video looks at higher ISO ratings. To my eye 3200 ISO looks good, but I am told it does not look good on TV. For a general discussion on Gain Versus ISO see our article on the topic.

The large Sony NP-F970 battery will power the camera just about all day. You can save money by buying the excellent Pearstone NP-F975. I’m using 32 GB SDHC San Disk Cards for about $25 each. Some prefer the 64 GB card, but I feel safer with two smaller cards.

There’s also a very clever shoulder mount. It pulls out and while the weight distribution is not like the old style ENG cameras where the weight was evenly distributed so the camera can almost balance on your shoulder, this is a good attempt to make a better hand-held camera. Some people add small weights using the threaded sockets which are apparently just for that purpose.

Like most reviewers of this camera, I am not thrilled with the kit lens, but it does fine. Just accept that this is a kit lens and the camera can use many other lenses. The 18- 200 power zoom kit lens has a 35mm-equivalent range of 27mm to 300mm. It’s slow, F 3.5 at its best, but it looks good. There are some sweet prime lenses and short zooms I am putting on my list. While the slow kit lens does not make for great low light shooting, a faster lens will help. At the same time this 18-200 kit lens is being grabbed up by still photographers at $548.00.

One big complaint is that the camera has no built-in ND filters! While it’s certainly not ideal, you can shoot outside in full sun if you stop down and increase the shutter speed. But gee whiz. It ain’t supposed to be that way. On the bright side, there is an Eclipse Genustech Neutral Density Fader Filter for about a hundred and sixty bucks I will be adding soon. This type of variable ND filter is simply two glass polarising filters sandwiched into the same filter mount. The more you rotate the darker it gets. In bright sunlight, you can limit the light that enters the lens. This allows you to get that classic shallow depth of field look on a sunny day.

The reason this camera does not have ND filters is that Sony decided a mechanical shutter for still photography was more important than NDs. If they had asked me, I would have said forget the still camera, give me NDs.

Conclusion
The Sony EA 50 is is a unique camera that has an unusual, appealing look and does a good job. It evolved from both still and video cameras. For the money I am delighted with the results. I will post some sample footage soon. If you own this camera or are thinking about, I’d like to hear your comments or questions.