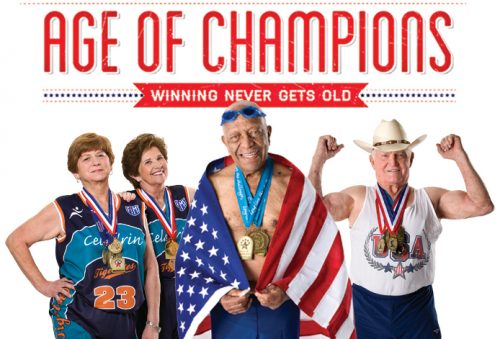 Age of Champions is a documentary that follows five competitors who sprint, leap, and swim for gold at the National Senior Olympics. Includes a 100 year-old tennis champion, 86 year-old pole vaulter, and rough-and-tumble basketball grandmothers who ignore the limitations of age.

Making a million with a doc is not easy. There are a few proven ways such as having a celebrity subject, a story with Oscar potential or based on a successful book. But there are other ways as doc producers Christopher Rufo and Keith Ochwat discovered. By trial and error they pushed their film Age of Champions to make well over a million dollars. It tells the story of five senior competitors who pursue gold medals at the Senior Olympics. Their techniques for documentary distribution are worthy of study.

The filmmakers had done many of the right things such as premiered at AFI Docs, won a national PBS broadcast, and pitched the film to the right distributors. But the offers they got were too small. So they worked on their own documentary distribution from scratch. Here’s what they did.

1. Experiment to find your real audience

They assumed that seniors would be the logical audience. That was a big mistake as they learned from a couple test screenings. They were surprised to learn that most seniors didn’t care about documentaries, Senior Olympics, or fitness. In one experiment they discovered that senior athletes expected to see exercise videos!

But in another experiment, they hit the jackpot audience — nonprofits and businesses that deal with senior health. These included senior health companies, senior centers and retirement centers. Not only did these administrators love the film. They wanted to buy it. Always test your niche. The real audience may surprise you.

Even though Christopher and Keith had a Netflix deal, iTunes/Amazon distribution, and a PBS broadcast, the vast majority of their film’s income was from direct sales on their own website. They set up a simple store using Shopify. They also created a range of products including educational licenses, consumer DVD and merchandise. They worked hard to drive traffic to their site. And when someone buys their film, automatic emails ask them to tell their friends about the film. Their now defunct website sold over $300,000 which was more than ten times more than they got from all their conventional documentary distribution incomes.

3. Local screenings can be profitable

Showing your film to local groups is a good way to spread the word and generate good will, but the trick is to make a profit at it. Christopher and Keith created a “screening kit” which included the DVD, discussion guide, postcards, posters and a cheap giveaway. This sold for $149. It was designed to offer a host everything they needed to organize a successful screening at a senior center, retirement home or senior health company. Over two years this screening kit brought in over $250,000.

You might not think this would be profitable, but it brought in $450,000 in speaking fees and follow-up sales. For every organization that bought a screening kit, they sent followup emails saying they were available to speak to groups. For larger groups having the film’s director speak onstage about the film adds a lot to the event. Their speaking fee was $3,000 plus travel.

While the same DVD is only $25 for consumers, the “academic license” to universities is $250. This is called public performance rights and is part of copyright law. They created a “university kit” that included a 60- and 75-minute version of the film and a 10-page “educators’ guide” designed specifically for the academic audience. They sold $88,000 in academic licenses.

The PBS deal allowed them to sell 60 seconds of “underwriting,” within their PBS broadcast. Surprisingly most filmmakers do not take advantage of this deal. Christopher and Keith made a list of corporations whose customer base was similar to the film’s audience. Then they started selling to these corporations. The result was that they sold 15-second spots for $75,000 each to Procter & Gamble, Rite Aid and Healthways. In addition they targeted the largest senior living companies and sold them screening kits and DVDs at a bulk rate. While this market of corporate sponsorships and sales was not easy, it did bring in more than $500,000.

None of this might have happened if they had settled for what they assumed was their primary audience. They produced two more PBS documentaries. They teach an online course about direct documentary distribution available at Filmmaker MBA.