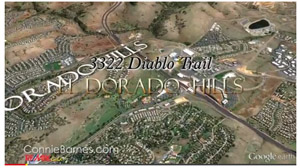 With Google Earth you can fly from outer space right into your own neighborhood. You’ve seen this in lots of high-end videos and movies. Chances are you’ve already played with this software. If not, visit Google Earth, download the free version and test it out.

Here are just a couple examples of what can be done:

Google Earth is not as popular as Google Maps, but it offers many features not found in Google Maps. The emphasis is on satellite imagery, as opposed to road maps. Unlike Google Maps, it allows you to explore any region on earth and some beyond. Google Earth can be an ideal tool for use in many business videos.

Permissions
Before you dive in, we need to check out the Geo Permissions tool to help you build your video project in a way that Google will approve. Click Google Permissions and learn what what you can do. You really wouldn’t want to get on the wrong side of Google.

If you’re producing for TV or a film, they’ll send you an e-mail to confirm whether you qualify and provide the next steps. This agreement is only for television and film uses; it is not required for online video projects.

You must always show attribution to both Google and their data providers on-screen at the time the video is shown. You cannot move the attribution to the end credits or fade it out after just a few seconds. Google will not grant an exception to this requirement.

Google instructs you to “Please mark the primary medium of distribution. Use “Other” only if none of these categories at all fits your use case.

TV: News/Weather
TV: Scripted/Reality/Other
Film
Online video — DO NOT USE this form. No licensing necessary if your content will not be used on TV or in film.”

There is some ambiguity in this statement. What if you produce a marketing video which will be distributed in several ways – DVD, YouTube, Vimeo. Is that covered? Check the Google rules carefully and don’t bypass the permissions link above.

It takes some time to learn how to use Google Earth. But considering how much it could contribute to your video projects, it is usually a good investment. Using Google Earth for a business requires that you subscribe to Google Earth Pro which is $399/year. If you are doing business videos, you could certainly charge customers a fee to cover part of this and/or just charge for your time. Google Earth Pro allows you to export movies. The free version does not. Screen capturing is not allowed.

One way to think about this investment is with the intention of becoming the Google Earth “go to” in your market. This service could be a very popular one. How many video producers would pay for your services?

If you are using Google Earth for personal and non-business use, you can use any screen capture software to record Google Earth your Google Earth movie. One such is Fraps http://www.fraps.com/, for $37. Check out the trial version first to make sure it will work for you.

There are many amazing things you can do with this software. Here is US Airway’s Flight 1549’s aborted flight when it landed in the Hudson River on January 15th, 2009.

Just be careful, playing with Google Earth can be a fascinating time suck.